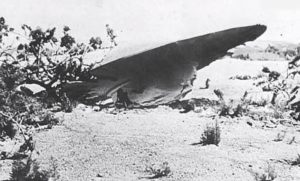 On the evening of July 2, 1947, Mack Brazel* and others heard a loud explosion near his farm approximately seventy-five miles northwest of Roswell, New Mexico. Some witnesses believed they saw a UFO crash.

The next morning, Brazel found wreckage of what seemed to be what was called, a flying saucer. He reported this to Sheriff George Wilcox who notified the Roswell Army Air Field (RAAF) base that sent two military intelligence officers to investigate.

The investigation led to a press release issued by the RAAF on July 8th; it stated that there was flying saucer debris on a ranch in the Roswell area, which attracted worldwide attention. A second press release was immediately issued by senior military authorities, claiming the initial one was a mistake.

The second release stated that there was no UFO; the crash involved a weather balloon.

In 1978, Major Jesse Marcel, one of the military officers who conducted the initial investigation, contacted UFOlogist Stan Friedman, and told him about the Roswell incident. His and others’ testimony spawned books and media interest.

Lieutenant Walter Haut was the Public Information Officer at the RAAF and the man who circulated the initial press release about the incident.

He wrote a notarized affidavit in December 2002 and authorized it for release after his death. After he died in December 2005, the document was published.

Haut’s Affidavit about the Roswell Incident

On July 8, 1947, he attended a staff meeting. Colonel William H. Blanchard, Commanding Officer of the 509th Bomb Group at RAAF and Brigadier General Roger Ramey were present. The discussion was about extensive debris in a field in Lincoln County and another site.

Samples of the debris were presented. It was unlike any material they had seen. The pieces resembled metal foil, very thin and exceptionally strong. Some had unusual markings. No one could identify them.

Blanchard dictated the press release about wreckage from a flying saucer which generated global publicity and phone calls. The Colonel told Haut to go home, but before he left, Blanchard took him to Building 84 that was heavily secured.

He saw a metallic-like object about thirteen feet long and six feet high without windows, wings, a tail section or landing gear. He saw a couple of bodies under a tarpaulin. The heads seemed larger than normal and the bodies appeared to be the size of a ten-year old child.

Marcel said that wreckage was replaced by remains of a weather balloon and radar kite. He was very upset about this and they didn’t talk about it again. Haut helped with the clean-up and was convinced the wreckage was that of a spacecraft and its crew.

In September 1947, President Truman authorized top secret Operation Majestic 12 to take charge of the Roswell incident. It was a committee of twelve influential US military leaders, intelligence advisors and scientists.

Truman instructed Secretary of Defense James Forrestal to start the project. In 1952, when Eisenhower became President-elect, he was briefed about the operation.

A flying disc-shaped object crashed landed in Roswell and it’s said that extraterrestrials’ bodies were recovered by the military. The document stressed the need to avoid public panic by keeping it top secret. Then, Project Blue Book was the branch of the USAF that investigated UFOs.

He had gathered many old newspaper clippings and government-leaked information from military and intelligence personnel.

Kissner claimed there was a government policy to shoot down UFOs in the late 1940s to the early 1950s until retaliation by aliens forced the cancellation of the program. The Truman Administration maintained a policy of denying the existence of UFOs in the interest of national security.

What Happened in Roswell in July 1947?

Now that documents have been made public, evidence suggests that a UFO crashed in Roswell. Marcel and others talked about the incident. Haut wrote a notarized affidavit.

Truman created Operation Majestic 12. Project Blue Book’s records are available to the public. There was a similar incident in Kecksburg, Pennsylvania in 1965.

Many wonder where the Roswell wreckage and the bodies are today. Haut kept some pieces of the wreckage in his office. Some wonder if he kept them after he separated from the service? Did the RAAF shoot a UFO down?

There are missing documents about the Roswell event. Adults who were involved in the incident are dying off, but many are optimistic that perhaps, one day, there will be answers.