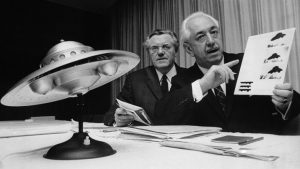 On September 8, 1994, Secretary of the Air Force Sheila E. Widnall announced that the USAF completed its research to locate records related to the alleged July 1947 UFO incident.

UFOlogists claim that an extraterrestrial spacecraft and its alien occupants were recovered in and that this fact was kept from the public.

New Mexico’s Congressman Steven H. Schiff requested that the General Accounting Office (GAO) begin an audit in February 1994, to locate all records relating to the Roswell Incident and to ascertain if they were handled correctly.

The GAO audit was completed and the results were published by the Headquarters of the USAF in 1995, titled The Roswell Report: Fact vs. Fiction in the New Mexico Desert.

The audit involved a number of government agencies primarily focusing on the Air Force. The USAF launched a search of offices, archives and records centers which might have helped explain the incident. A number of people who may have had knowledge of the event were interviewed.

Prior to the interviews, Secretary Widnall released those from previous security restrictions that could have hindered their statements. The Air Force didn’t find or develop information that the incident was a UFO. It found no indication of a government cover-up.

Information obtained indicated that the materials recovered was consistent with a weather balloon used in a 1947 classified project. The Air Force maintains the balloon tale is true and added crash test dummies in 1997’s official Roswell: Case Closed report, two weeks before the fiftieth anniversary of the event.

Many people saw a mysterious aircraft plunge to the ground in July, 1947. Mac Brazel brought pieces of debris to Roswell Sheriff George Wilcox who called the Roswell Army Air Field, 509th Division to find out of one of their planes had crashed. They stored fifteen nuclear bombs, the planes equipped to fly them and pilots and bombers trained to release them.

Soon, trucks filled with wreckage and bodies took them to Hangar 84 where they would be flown to other AFBs, including Wright-Patterson, then, headquarters of Project Sign, the division of the USAF that investigated UFOs and predecessor of Project Blue Book. According to various sources, Project Sign’s files haven’t been declassified.

Evidence was confiscated. Orders were given to all involved not to talk about the incident. Brazel managed to record a radio interview, but Washington DC contacted the station’s owner and told him that he would lose his FCC license if he broadcast it.

Three military officers escorted Brazel to the Roswell Daily Record. He changed his story, claiming to have found the debris in June. Brazel said that he had, previously, found two weather balloons, but what he found this time didn’t resemble either of these.

He said that, if he found anything else, he wouldn’t talk about it. He disappeared for several days and never talked about the incident again.

Glenn Dennis has said he was the undertaker that the 509th called for children’s hermetically sealed caskets and instructions on how to preserve corpses for research. He also said that he went to the base to see if he could help. He claimed he saw a nurse he knew was told to leave and received death threats.

Robert Shirkey, assigned to the 509th, involved in the retrieval and the cover-up, doubts Dennis visited the base. Military secret operations called for the highest security.

Shirkey contends that people don’t wander into a highly secured building without being stopped before they enter. The twenty-seven people who arrived with the convoy from the debris site wouldn’t disappear and leave evidence unattended.

Witnesses involved were sure they saw the crash of a UFO and an alien crew. Many UFOlogists theorize that the craft probably bounced near Roswell, leaving debris, but regained altitude and finally crashed in Corona NM, approximately forty-five miles away.

It’s been alleged that the US government has been secretive about the crash, covering up covert operations.

In less than a decade after Roswell, the CIA officially started MK ULTRA, covert experiments to use LSD to create altered states of consciousness in order to induce “mind kontrol.”

USAF Project Blue Book “investigated” UFO cases; however it’s been suggested that there were efforts to debunk their sightings. The Kecksburg, Pennsylvania UFO incident has many similarities and is called the Roswell of the East.