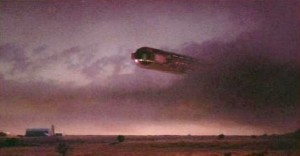 There is no doubt that UFOs are strange. The fact that they are usually seen silently zipping around in our skies is weird enough; but throw in the fact that many UFOs that appear solid are seen to be constantly changing shape and size, it’s enough to drive any serious UFO researcher to take up butterfly collecting instead.

It is one of the great mysteries of UFOs, how can something that looks so real not behave like a solid object and change shape as rapidly as smoke in the wind? This has led to wild speculations on the true nature of UFOs and allowed skeptics to dismiss the entire phenomenon as simply misinterpreted natural events.

What hard-core skeptics fail to take into consideration is the thousands of diverse UFO sightings that have come in over the years that exhibit the same shape-shifting characteristics. A reported sighting of a weird object that changes shape can be a good way to distinguish a real UFO from one that is fraudulent.

UFOs are seen to come in all kinds of different shapes and sizes, ranging from saucers, ovals, cigars, spheres, rocket and triangular shaped. They can suddenly appear and disappear, only to reappear in a completely different location. They can split in two and rejoin again instantly. This has led to all sorts of heated arguments between UFO researchers who have a preferred shape, choosing to throw out cases that don’t meet their criteria. However, if you take into account all of the reports of UFOs seen to morph from one shape into another, then possibly the vast diversity of UFOs is not so difficult to explain after all.

On June 29, 1954, A British Overseas Airways Corporation (BOAC) Stratocruiser Centaurus left New York Idlewild airport bound for London. Just after 9:00pm the aircraft passed 170 miles southwest of Goose Bay, Labrador, flying northeast at 19,000ft. The crew suddenly noticed an object to the west of the plane that was roughly five degrees aft of the port wing at a distance of about five miles. As they drew closer, the crew could see a large pear-shaped UFO flying in formation with six other smaller objects.

Against the sunset these objects appeared dark with the six smaller UFOs changing their positions around the larger craft which seemed to change from its original pear shape to a telephone handset shape and, in the words of Captain Howard: “what looked like a flying arrow – an enormous delta-winged plane turning in to close with us.” The anomalous shape-shifting object seemed to be solid with definite, clearly-defined edges.

As the jetliner drew closer the smaller UFOs formed into a regular line and seemed to merge into the larger object. Then the remaining large UFO appeared to suddenly shrink and vanish right before the eyes of the startled crew.

Captain Howard remarked later: “…they were obviously not aircraft as we know them. All appeared black and I will swear they were solid. There was a big central object that appeared to keep changing shape. The six smaller objects dodged about either in front or behind…”

In another case a Baptist Pastor while traveling with his family in the western part of the U.S. on June 8, 2002, observed a silver aluminum object flying above the mountains.

The Pastor says, “When I first noticed the object it was in the shape of a box and about the size of a small private plane. I tried to show it to my family and I was pointing where to look. Taking my eyes off of it for a moment, it changed to a round bottom cup shape without the handle (the round section being at the top). The sighting lasted about 30 seconds. The craft was not in a hurry really but seemed to be just cruising around. I don’t know how it disappeared. I lost sight of it trying to point it out to my family after looking away for just a second.”

On June 5, 2005 a man was stopped at a traffic light on route 422 in Niles, Ohio when he noticed a bright silver, metallic UFO in the clear blue sky in front of his car.

“It was thin, cigar shaped with rounded ends and there was a large spot of sun glare shining from the left (back end). With my arm completely extended, its length would have been about the width across of a quarter.”

About six to seven seconds after he first spotted the unusual object, it seemed to change shape with the front end moving slightly inward so that the object took on more of a boomerang shape with one side shorter than the other. The glare from the sun that had been so bright at the left end moved in a quick flash and settled more in the center of the object and there seemed to be a darker spot right in the middle.

At that point the UFO was seen to ripple and get fuzzy at the edges. After the hazy ripple, it completely vanished leaving the eyewitness wondering what he had just seen.

One odd shape-shifting UFO was actually captured on camera in 1994 at an undisclosed location within the Nellis Air Force Base Bombing and Gunnery Range Complex, Nevada. The videotape is said to have been smuggled out by contractor personnel who had operated tracking stations on the Nellis range. Even though the UFO was photographed by a very good remote controlled fixed mounted camera, it still has that fuzzy, cotton-ball look about it which seems to be common among UFOs.

The Nellis Test Range UFO footage is an excellent example of what seems to be a real UFO caught on tape. This object, tracked by military radar and cameras, flies boldly around in a bright, clear sky seemingly unconcerned that it is being watched and photographed.

The object recorded on videotape flying over the dessert terrain that day appears to be constantly changing shape. At first it appears to be disc-shaped, then it looks somewhat like a small jet with round stubby wings, then it changes into three-balls, all the while the object is never clearly defined. It is as if it is surrounded by fog or mist, keeping it just out of focus. What kind of object are we dealing with that is never still, is always changing shape, and seems to be not quite solid?

As the object slowly spins a projection of some kind can also be seen. There is also a shifting “coal black” region. More often than not, the craft has a morphing, indefinite profile that appears to be self-luminous.

Physicists have speculated that what we see around shape-shifting UFOs may not be the UFO itself, but rather the energy change occurring around the UFO as it moves between dimensions. Apparent “vehicles” that seem to change shape while in the air may not be spacecraft at all, but cross-sections of four-dimensional objects that bisect familiar 3-D reality. For example, a 3-D cross section of a 4-D tube would appear spherical. If the tube was irregular in shape, we would expect it to “change shape” in our three dimensions as it moved, much how a sphere passing through a two-dimensional plane would appear like a rapidly growing disk to any watching flatlanders.

Alan Holt and David Froening at the end of the 1970s worked on an extension of Einstein’s Unified Field Theory involving what they referred to as a “field propulsion” craft. This spacecraft would change color and shape as it entered different stages of flight – this is similar to many UFOs that are reported around the globe.

Rumors have circulated among the UFO community that modern aircraft designs have been influenced by back-engineered extraterrestrial spacecraft. According to the website LiveScience.com, NASA and Department of Defense engineers are trying to create a plane that can morph into new shapes during flight by flexing or twisting, due to being made of new metals that form a kind of “flexible skin.”

Amazing advances are being made in the development of new metal alloys. These alloys have remarkable characteristics, in that they will change shape upon the application of an electric current or magnetic field. They change shape, or morph rapidly and with some considerable force. They are termed “compact hybrid actuators,” alloys that incorporate advanced nano-technology that is designed to enable them to mimic living systems in their versatility and dynamism.

The list of potential applications seems endless, and the U.S. military is funding a variety of related research programs exploring the full range of options. Self-healing wings that flex and react like living organisms, versatile bombers that double as agile jet fighters, and swarms of tiny unmanned aircraft are just a few of the science-fiction-like possibilities that these next-generation technologies could make feasible in the decades ahead.

In his 1997 book “The Day After Roswell”, the late Col. Philip J. Corso described his own experience of examining unusual material alleged to come from the 1947 UFO crash site in New Mexico:

“There was a dull, grayish-silvery foil-like swatch of cloth among these artifacts that you could not fold, bend, tear, or wad up but that bounded right back into its original shape without any creases. It was a metallic fiber with physical characteristics that would later be called ‘supertenacity,’ but when I tried to cut it with scissors, the arms just slid right off without even making a nick in the fibers.

If you tried to stretch it, it bounced back, but I noticed that all the threads seemed to be going in one direction. When I tried to stretch it width-wise instead of length-wise, it looked like the fibers had re-orientated themselves to the direction I was pulling in. This couldn’t be cloth, but it obviously wasn’t metal. It was a combination, to my unscientific eye, of a cloth woven with metal strands that had the drape and malleability of a fabric and the strength and resistance of a metal.”

Corso claimed in his book that he “seeded” the alien material to the research departments of Monsanto and Dow. Furthermore, Corso claims that the material had previously been delivered to the Air Material Command at Wright Field. Wright Patterson Air Force Base is famous in UFO circles for its Foreign Technology division, purported to hold extra-terrestrial craft and artifacts. It could be that the new morphing technologies being used in new, top secret aircraft are the results of years of study on the UFO debris captured by the U.S. in the 1940s.

The entire UFO phenomenon is always changing and never clearly defined. When you think that you finally have something definite, the phenomenon changes again and you are back at square one. For more than fifty years, this is what has constantly confounded UFO researchers – when it comes to shape changing UFOs, there appears to be no real truths or answers.

Life Originated Long Before the Earth