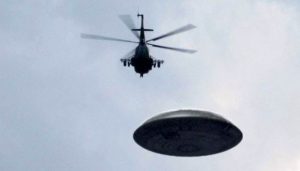 March 27 residents of one of the areas of Los Angeles witnessed a very unusual picture. High in the sky above the city, an unidentified flying object appeared, resembling a large dark sphere.

Soon, three black military helicopters appeared, hovering at some distance from the UFO and, apparently, watching it. Turning on the video below, obtained by a random witness, you can see this scene yourself.

Many Internet users, as you might guess, felt that aliens had flown to Earth, and the US military immediately responded to the appearance of intruders from another planet.

It is reported that after some time the spherical object soared up and disappeared, and the helicopters soon after flew away. Alas, this moment did not get on the video. Some considered such statements to be a hoax.

Skeptics are expected to say that the incident should have a very prosaic explanation, but they cannot even guess which one.

Meanwhile, reputable ufologists say that the aircraft of aliens visit our planet very often, and in front of us one of many such amazing moments.

The military are afraid of representatives of extraterrestrial civilizations and do not dare to attack them, preferring to just watch the aliens.