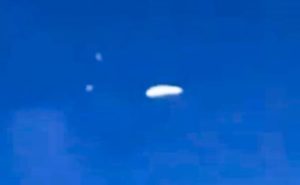 The passenger of the plane saw a very strange phenomenon, which is quite difficult to call natural. Through the porthole he saw a white UFO that was hovering near the plane.

The man was not at a loss and recorded a mysterious companion on a smartphone.

The footage shows how an unidentified flying object shoots with obscure balls that are fixed in space, forming a triangular shape.

This video is produced in 2 parts. The first part is the original video. At first, you do not really notice that the UFO releasing what looks like orbs. With the second part slowed down and enhanced you will be able to see the orbs form a triangle.

Most users who watch the video believe that this is the work of representatives of extraterrestrial civilizations.

Judging by the form and strange actions, it does not look like this device could have been created by man.

Scary incident: triplets scream and hide from a monster in their bedroom