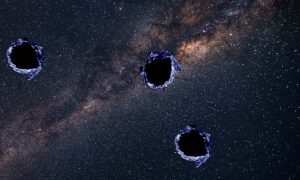 An object unknown to science literally punched a hole in the Milky Way. Astronomers have already compared the phenomenon with a pistol shot: a gap among the stars passes through the entire galaxy.

Everything happened in the star stream GD-1, about 45 thousand light years from the solar system. Most likely, the rupture produced a supermassive black hole, flying through all the stars with incredibly high speed.

An anomalous gap in the star cluster noted Ana Bonaka, an astrophysicist from Harvard University.

In diameter, this object should have had at least 20 parsecs, approximately 65 light years. The gap really resembles a bullet hole: at the entrance the edges are smooth, but the exit boundaries are torn and chaotic.

The flying object as if scattered the stars with its gravitational field. The incident almost contradicts the laws of physics.

Ana Bonaka believes that the gap could produce yet unknown type of dark matter. If this hypothesis is confirmed, scientists will have to change the entire existing model of the universe.