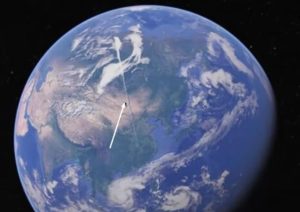 An unusual discovery was made by a user of the Google Earth service in early November 2020.

On the map, he found a huge mysterious narrow cloud-like object in the form of a white line 3,000 miles long (about 5 thousand kilometers) over the Earth.

The fact is that this is not the first time that objects extended in the sky appear in the sky. Similar phenomena were observed by users in different parts of the globe. For example, a similar long cloud was observed over the Earth in 2019.

Some researchers believe that this could be a laser beam, while others are sure that this is a trail from a passing meteorite. Someone thought that the long trail belongs to a passing hypersonic missile. Then the question arises, who launched it and for what purpose?

In general, there are many questions, but so far not a single reasonable explanation.

The video has already gained more than 27 thousand views, and since its upload to the YouTube channel, it has caused a lively discussion on the Internet.