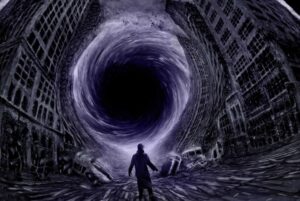 In March, 2006, Carol Chase McElheney, along with her dog, was driving from her home in San Bernardino to the sheep dog trials in Perris, California. Topping a hill, she saw an exit sign to nearby Riverside.

Her family had a long history there, going back into the 1800’s. Her grandparents were buried in the local cemetery. Her grandmother and aunt had homes there, and Carol herself lived there for a while after college.

It occurred to her that it would be fun to visit the old familiar places there on the way home and wander through the cemetery where her family members were buried. As soon as she thought that, she smelled a whiff of cigar smoke in the car. That was all she remembered of her grandfather, who died when she was a young child.

She drove on to Perris and checked into a motel. After the first sheep dog trials, the pull to visit her old home was strong, so she and her dog got into her car and headed for Riverside.

She stopped first at the cemetery, but something was terribly wrong. She claims she couldn’t find her childhood home or those of other family members.

In fact, she didn’t recognize any of the houses, although all the numbers were still correct. Even the cemetery where her grandparents were buried was just a fenced lot full of overgrown weeds.

Confused, Carol pulled away from the empty lot to see if she could find anything familiar. She did. She recognized Riverside City College and Central Middle School. “Some of the other stuff was right. The college looked right, the middle school looked right,” she said.

But when she pulled onto University Avenue, things were markedly different. “University Avenue was a main drag and there were scary looking people, so I got out of there,” she said. “I looked for the Mission Inn and it wasn’t there.”

Carol believes she had stumbled upon a parallel universe, in which Riverside was a much darker place. Next she drove to the street where her grandmother and aunt used to live side by side. The neighborhood had many bungalows that were built in the 1920’s.

Her grandmother had lived in a large tudor home with a tall eucalyptus in the front, but it wasn’t there, nor was her aunt’s house. The neighboring homes in her 2006 visit were newer ranch style with bushes. Even the house that she lived in for a while after college wasn’t there.

It appeared run down, with scary people and lots of graffiti. The banks, insurance companies, and restaurants were gone. It made her sufficiently uncomfortable that she was afraid to stop and ask for directions.

Beyond that, she feared that if she stopped her car and got out, she would be captured by whatever unpleasant thing was going on there and just go missing.

After a couple of hours of this bizarre adventure, it was a relief to get out of there and get back to Perris. Her hotel was still there and her key still fit the lock. Things were totally normal in Perris.

A few years later McElheney’s father died and when she returned to Riverside for her father’s funeral, it had reverted back to the town she knew as a child. The streets looked much like when she lived there in the 70’s.

A cousin confirmed that her grandmother’s home and her aunt’s home were just as they were. Her father was buried next to her grandparents. The family had lunch at the Mission Inn, which had been missing during Carol’s ’06 visit.