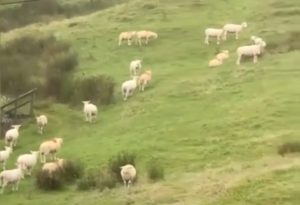 A very strange video was uploaded to the popular TikTok platform a few days ago. In the video, a flock of sheep froze on the hill for several hours, as if someone had hypnotized them.

Rory Davis, 24, filmed a very interesting scene that he watched while vacationing with his family in Troutback, England. When the guy went out into the street, he saw a flock of sheep in the mountains, which stood in one place and did not move.

The resulting scene is quite suitable for a modern horror movie. Rory was very scared of what he saw and from the shock began to laugh.

But even more frightening was the fact that the sheep remained motionless even after several hours. The impression was that someone had hypnotized them.

After that, Rory decided that he should take a little walk and come to his senses. When the guy returned again, there was not a single sheep on the hill that stood and did not move.

Rory said that he lives in the countryside, but he has never seen anything like it before. When the guy came from the walk, he saw that absolutely all the sheep had disappeared, as if they were not there.

To date, the reasons for this behavior of the flock of sheep have not yet been established.

The terrifying legend of Cortez’s conquistadors is true, says archaeologists