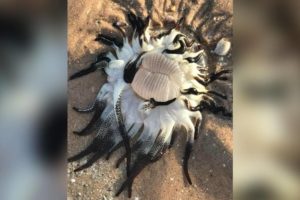 Social media users have tried to determine what this extraordinary tentacular monstrosity really is. This unusual specimen was discovered on a beach in the town of Broome on the north coast of western Australia and sparked a heated debate recently after a photograph of it was posted on Reddit.

Comprising a mass of black – tipped tentacles with a swollen central appendage, the creature looks quite different from anything you would normally expect to find washed along the coast.

“Mother and girlfriend found this today on the beach,” wrote Horrorwolfe, the user of Reddit.

While many suggestions have been made, there seems to be a general consensus that the creature is in fact a type of marine anemone that has been flipped upside down.

Some have said that Dofleinia armata-otherwise known as the armed anemone-could be. Known to grow up to 20 cm across with 50 cm long tentacles, this alien-looking species is one of the largest marine anemones in Australia. Since it also has a rather nasty sting, it is definitely not recommended to touch it.