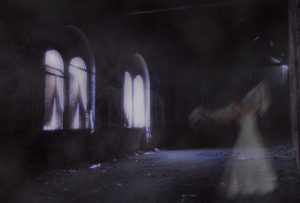 Let me start by saying that, though the activities in this home have been going on for over fifty years, I wouldn’t exactly call this a haunting.

Rather, I feel the home is the unfortunate focus for spiritual activity.

The home in question is a simple wood frame home. It was initially a six room structure before two additional rooms were added twenty years ago.

Upon doing a little background check, I found that this home was originally located in the city cemetary and that it had sat vacant for many years before my grand- father purchased it. It was then moved to stand beside the Baptist Church. My mother grew up in this home.

She experienced many strange occurances which she wouldn’t share with us, but one in particular she did share which happened when she was around eight years old. She was sleeping one night in, what is now the middle bedroom, when something awoke her.

She didn’t know what. She saw on the bedroom wall the shadow of a figure moving steadily across the wall. There was enough moonlight to fully illuminate the room as both windows had the blinds up. There wasn’t anyone outside the home casting the shadow nor was anyone in the room with her.

She leaned up closer to get a better look, when the shadow reached out and struck her! The blow was hard enough to turn her head with force. She immediately shot under the covers and remained their till morn.

As an adult,with children of her own she remained in this home. My sisters have told me about a number of accounts, though I will only mention one.

Both have stated that about twice a week, something would come to the backdoor and bang repeatedly with such force as to shake the entire home.

Our mother would always break out the shotgun until the beating stopped though there was nothing physical at the door. The backdoor was located in the kitchen and there was a large window giving a clear view of the entire backyard. There was never anything or anyone to been seen when this beating was going on.

I can recall when I was about six or seven, watching one of those old fashion, solid steel, irons roll accross the kitchen floor. If you guys are familiar with the type of iron I’m speaking of (you know– the kind which had to be heated on an open flame) you know that those things weighed about ten pounds and could not, regardless of whether there was a breeze or not (and there wasn’t) roll on its own.

I am prone to hearing things, though I have seen things on two occasions.

My younger sister, we’ll call her Baby, would always see things. The account which I want to mention took place when I was nineteen and she was fifteen. Our mother had passed away and our father had remarried, so it was just she and I living in this home.

On this occasion our neice, Tiff, was staying over for a few days. I worked an 8:00 to 5:00 job and if I ever was going to be late, I would call Babe and tell her when to expect me. She was nervous about being in the home alone.

This particular time, since our neice was there with her, I did not bother calling. When I eventually got home at around 7:00 p.m. my brother, Babe and Tiff were standing on the front porch. Babe was noticably upset.

When I asked why, she asked me if I had been home earlier to change clothes and then left? I responded in the negative at which point she burst into tears. My neice explained that around 5:30 they heard my car, they then heard the front door open. They opened the bathroom door, which has a clear view of the front door, to be certain it was me. They said that I walked in dressed in a red dress, red pumps, gave them an irritated glare and marched on towards the back.

Well, as I previously stated, I did not get home until close to 7:00 and though I owned the outfit in question, I was dressed in tan slacks and a matching tan blazer that day. When they went to find me later I was not there. They stated that they searched the entire house before looking out and seeing that my vehicle was gone. Babe was spooked and so was I. We spent the next two weeks at our sister’s home.

I still live in this home. Over the past three years it has been basically quiet. As of late, however, I am noticing unexplained,moving shadows and unaccounted movement in my peripheral vision.

My fifteen month old daughter appears to see something which she points to and tracks with her eyes and head. Upon occasion she has appeared to follow it looking puzzled. I am the only one willing to live there and put up with the extra quirks particular to our home.

I have lived many a night in fear and don’t want my child growing up that way. So I think I will be moving. Hope I didn’t bore anyone. Comments welcomed.