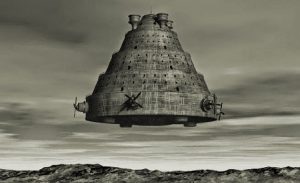 The Vedic literature describes air chariots that are moved by pulses, take off vertically and fly in all directions. But where do they come from?

The Vedic texts date back to twelve centuries B.C and some advocate that they are even older. There is evidence of cities found by archaeologists in the north of India that are at least five-thousand years old.

What is uncommon about these cities is that they seemed to be completely modern, having sewage, avenues, irrigation and electricity in a time when people were supposed to live in a very primitive manner.

The Vedas were probably written during this peak of the Indian civilization, as they make reference to several flying machines that could only have existed in a very modern society.

Although no remains of flying objects were ever found in the excavations, the details of the descriptions provided by the ancient Hindu texts leave room to many interpretations, one of them is that this civilization would have learned everything they knew about science and technology from extraterrestrial visitors.

Vimanas are the flying machines described in the Vedas. There are many different types of them but most of the descriptions are similar to the modern UFO sightings reported all over the world.

They appear in the ancient Sanskrit texts as being cylindrical objects made of steel or gold, capable of flying in all directions and cover distance as far as stellar regions, some of them could be used both in air and in water and become invisible when necessary.

They could be operated on power, engines, mercury and pulses and some of them were so big that they could carry thousands of passengers through the air.

The Vymaanika-Shaastra is a document of the fourth century B.C written by Bharadvajy that is based on the Vedas to describe how to use a vimana, how to protect oneself from storms in short flights and how to use solar energy.

It also lists the materials that absorb heat and light that are necessary to build the flying machines. This document was translated into English by Maharishi Bharadvaaja in 1979, and published by Mr. G.R. Josyer in India with the name Vymaanidashaastra Aeoronautics.

The Air Chariots of the Vedic Literature

Many excerpts of ancient sanskrit texts refer to the vimanas:

– “two storey sky chariots with many windows, ejecting red flame, that race up into the sky until they look like comets . . . to the regions of both the sun and the stars.” (Mahabharata)

– “Now Vata’s chariot’s greatness! Breaking goes it, And Thunderous is its noise, To heaven it touches, Makes light lurid [a red fiery glare], and whirls dust upon the earth.” (Rig Vedas)

– “An aerial chariot, the Pushpaka, conveys many people to the capital of Ayodhya. The sky is full of stupendous flying-machines, dark as night, but picked out by lights with a yellowish glare.” (Mahavira)

– “Bhima flew with his Vimana on an enormous ray which was as brilliant as the sun and made a noise like the thunder of a storm.” (Ramayana)

– “He traveled in that way through the various planets, as the air passes uncontrolled in every direction. Coursing through the air in that great and splendid aerial mansion, which could fly at his will, he surpassed even the demigods.” (Shrimad Bhagavatam)

According to the Rig-Veda, an ancient king of India named Salva, acquired a flying machine from Maya Danava, who lived in Taltala, another planetary system. This and many other parts of the Sanskrit texts indicate that extraterrestrial life was a common knowledge at that time.

One might argue that the references to flying machines and beings from other planets are just a symbolic way to depict the Hindu gods, but the fact that five thousand years ago the Indian civilization already knew about different planetary systems, admitted life in other planets, could envision air machines powered by engines and pulses, is intriguing enough.

It’s important to remember that only fairly recently did the western world admit that the earth isn’t the centre of the universe and even today some people find it impossible to imagine life in other planets.

If ancient India was as modern as excavations show, many argue that it doesn’t seem absurd that these people had flying machines that reached other planets and kept contact with inhabitants of other solar systems.

According to the Ramayana, the Rama empire would have happened fifteen-thousand years ago, at the same time that Atlantis would have existed. Both civilizations share a similar story, that of the advanced territory that were visited by the gods, but vanished all of sudden.

Would the same cataclysm that made Atlantis disappear under the waters, be responsible for the end of India’s high-tech society? The answer is all over the ancient Sanskrit texts, in between the lines.