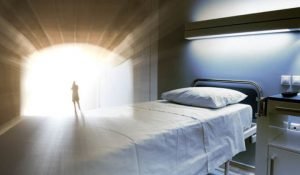 Anomalien.com reader Coby shares his story about an encounter with the unexplainable.

I “died” under anesthetic during a trip to the dentist in 1972, when I was 15 years old. I found myself standing in the room beside the chair and I walked over to the door to get out, but my hand went through the door handle.

There was a nun standing near the ceiling, and at first I thought she was standing on something, but she told me I had died and reached out her arms to me. I floated up to her and screamed for God or Jesus to help me.

Suddenly a great white light came rolling in and surrounded me. It spoke by moving, and I understood what it said by telepathy. It was alive. It opened a little on its right side and I saw my entire life until that point as if on a tv screen.

We watched the screen together and whenever I sinned, the Light grew sad and darkened. I felt its sadness and darkness. It was awful to think that I had hurt such a pure brilliant perfect being. I begged forgiveness and the light was restored to its former brilliance again.

The light is Truth. It knows all truth and it is impossible to tell a lie in its presence, unless you would care to argue with it, which causes it and you to become darkened. The most horrible feeling ever.

Then it showed me what the future would be if I went back and it wasn’t that good. Then it told me to go with the woman who would show me where I could rest. I took the woman’s hand and she led me through a long dark tunnel at great speed. But then we heard a voice, “Stop!” and we soared back into the light.

It asked me if I wanted to go back but I wanted to see more of the marvelous things it was showing me first. I was so happy to stay there in its presence. But it said, no! you must go back now.

Then it pushed me on top of my head and there was a horrible swirling and a whooshing sound and I woke up in the dentist’s chair. I’ve shortened this version, but when I was up there near the ceiling, I saw my body sitting in the dentist’s chair, I traveled through walls to see my parents, I saw events in the future, and I was so ecstatically happy & full of joy in the presence of the light, it was unbelievable!

The only pain I felt was when the dentist etc were re-starting my heart and a crushing pain went right through me. The only fear I felt was in not understanding why my hand was going through the door handle and why everyone was ignoring me.

When the Light appeared, it calmed me. I want everyone to know that there IS life after death, and to those who are willing to face the truth about themselves, death is far more beautiful than anyone can imagine.

Have You Already Lived Before?

Is Life After Death Real? Kubler-Ross’s View on the After-Life