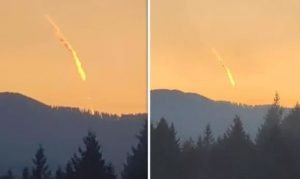 A mysterious “fireball” observed falling to Earth in the U.S. prompted an official investigation when regional observers said no meteor in the area was detected, reports express.co.uk.

A baffling “fireball” spotted crashing into a small U.S. city left leading scientists puzzled. Police officers in Polk County, Oregon, acknowledged that they had “no idea” what the object on Thursday afternoon was being observed.

Also involved in the mystery were the U.S. Air Force and the Federal Aviation Administration.

Firstly, the object’s witness thought it was an airplane that had just crashed and immediately notified authorities. However, that theory was ruled out by the US Air Force, according to Lt. Dustin Newman from the Polk County Sheriff’s Office (PCSO).

Local authorities, including the US Forest Service, a Life Flight Network helicopter and a local timber company, are working together to determine the origin of the fireball.

Richard Romano, who captured photographs of the sighting, ruled out a meteor.

He said: “I’ve seen meteors before, and they’re bright white and in five seconds they’re gone. That one lasted way too long.”