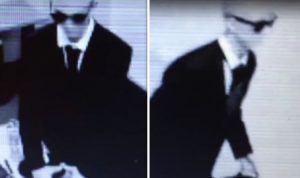 MIB descriptions are similar. Peter Rojcewicz, one of the leading authorities on them, had an encounter with one that changed his life. What could the strangers be?

Visits from these mysterious beings known as Men in Black or MIB go back, at least, to the 1950s when Albert K. Bender allegedly saw a UFO in Bridgeport, Connecticut and was terrified when three MIB stopped by to see him. Since then, others have documented their encounters.

Descriptions of Men in Black

They’re mysterious beings who harass, question and threaten UFO researchers and witnesses. Descriptions of MIB include:

– Wearing new tailored black suits, white shirts and black ties.
– Having darkish complexions, almost Oriental-like with expressionless facial features, smooth skin and lacking facial hair. They have exceptionally broad shoulders and narrow waists. The hair is perfectly coiffed and shiny black.
– Speaking formally, using rigid phrases
– Usually traveling in groups of three, looking like triplets and walking with stiff movements in configuration. Sometimes, they carry briefcases.
– Driving large black expensive new cars that may have weird logos or insignias
– Seeming to know things about UFO witnesses who have kept these a secret and appear to be able to do other super-human things, like materializing or dematerializing

According to Peter, a professor of humanities and folklore, there have been hundreds, possibly thousands, of such experiences over centuries. He believes they’re part of the extraordinary encounter continuum as are faeries, ETs, monsters, UFOs and others.

Peter had such an experience in 1980, although he hadn’t seen a UFO or an alien. He was in the University of Pennsylvania’s library, reading a UFO book suggested by a colleague when he noticed black pants and shoes.

When he looked up, he saw a gaunt tall pale man in a black suit and tie and white shirt who was about 6” 1” and weighed approximately 140 pounds. At the time, Peter knew nothing about MIB.

The MIB sat and asked him what he was doing. Peter said he was reading about flying saucers. Had Peter seen one? No. Did he believe they existed? He didn’t know much about them and wasn’t sure if he was interested.

The MIB shouted they were the most important reality of the century. Then, the stranger stood up and told Peter to go on with his resolution and left.

Whatever the MIB are, they instill fear in people after the encounter.Many experients’ lives have changed; some for the better; others, for worse. The theories are:

– They are extraterrestrials, androids sent to silence UFO witnesses and researchers. This is supported by witness’ accounts of the MIB’s androidian, robot-like, behavior.

– MIB are employees of a secretive government agency or an unknown branch of an intelligence agency. This is the favored speculation of those who like conspiracies and assume that governments are aware that UFOs exist.

– The MIB are figments of witnesses’ imaginations or hallucinations. There are many thoroughly documented cases from multiple witnesses. It’s highly doubtful that all of these people suffered from a type of mass hallucination.