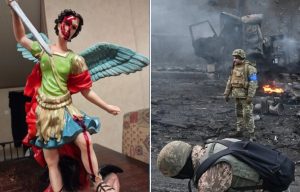 The figure of Michael the Archangel, the patron saint of Kiev, began to bleed before the Russian attack on Ukraine.

The day before the Russian invasion of Ukraine, a dark red liquid resembling blood began to ooze from the figure of Archangel Michael. An unusual phenomenon was noticed by a resident of the American Colorado.

Alicia Martinez, 57 is the owner of the statue of Archangel Michael. As she admits, on February 23, a few hours before Russia’s attack on Ukraine, she noticed a disturbing phenomenon.

From the forehead of the statue of Archangel Michael, a liquid resembling blood began to come out.

While speaking to a friend on the phone, one of her roommates knocked on her bedroom door telling her to come quickly. “I asked him what was happening, but he was standing there shaking,” she said.

That is when she witnessed her statue of St. Michael appearing to bleed from the right side of his head. “He’s not crying,” explained Martinez, who is originally from Zacatecas, Mexico. “He’s bleeding from the forehead. [The blood] passes around his eyes. It doesn’t enter his eyes.”

She added, “It was dripping like when you cut yourself and the blood drips out; that’s how it was.”

“I said, “God, it’s either something good or something bad. I don’t know what it is, but something is happening here,” the woman confessed. Alicia Martinez called a priest she knew who told her that she did not need to be afraid of the phenomenon and that she should pray instead.

According to catholicnewsagency.com, the figure of the archangel was bleeding for a week. The phenomenon subsided as the liquid began to drip onto the head of the devil, whom Archangel Michael is holding under his foot.

A 57-year-old Colorado resident contacted the Archdiocese of Denver to investigate the unusual phenomenon.

Michael the Archangel is the patron saint of Kiev, and his figure is located in the city center on Independence Square.