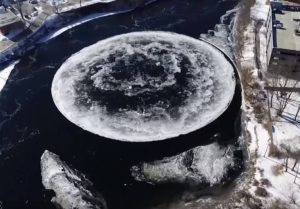 The enormous circle of ice formed in freezing weather on Tuesday afternoon in the Presumpscot River.

Due to its perfectly circular appearance, the impressive spectacle, believed to be about 100 meters in diameter, quickly became a social media phenomenon.

Ice disks like this form at the bends of rivers, where the accelerating water creates a rotational sheer, breaks off pieces of ice and spins them until they form in a circle.

The disk footage was captured by Tina Radel, the marketing and communication director of the city.

The phenomenon is hoped to help drive new visitors into the region.