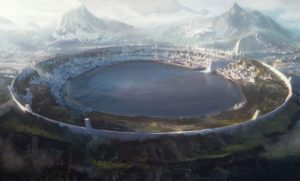 Doctor of Philosophy Valery Dyemin, a researcher of the Arctic region, maintains that Hyperborea (“beyond the Boreas (north wind)”), a mythical land that the Greeks thought was located beyond Scythia, existed in reality. The legendary French scientist Jean Sylvin Baiae attempted to prove the existence of Hyperborea a few centuries ago.

Could you name any other scientists who also made a lot of effort trying to shed some light on the mystery of Hyperborea?

“Yes, there were many of them. Not only the geographers and historians worked on the problem, the linguists also made several contributions. The rector of the University of Boston William Warren published a book titled Paradise Found at the North Pole in late 19th century.

In total, there were 11 editions of the book. Warren analyzed a large number of spoken stories and legends relating to paradise on Earth (Eden). According to him, all the information contained therein stems from vague recollections of some ancient perfect land that lay somewhere in the Arctic region.”

What exactly are we talking about? Which part of the world should we look at?

“I believe we should be looking for the traces of that civilization in Eurasia and American arctic regions, in the islands and archipelagos of the Arctic Oceans, at the bottom of some seas, lakes and rivers. It’s worthy of notice that Russia has the largest number of locations and artifacts that could be bear relevance to Hyperborea.

Some of the above have already drawn attention of specialists; others are yet to be discovered. Active exploration is currently under way in the Kola Peninsula, in the Island of Vaigach, in Karelia, Ural Mountains, West Siberia, Khakasia, Yakutia, and a few other regions. There are good prospects for conducting research in Franz Josef Land, Taimyr, and Yamal.

The geographic term “Hyperborean platform” is technical use. Scientists keep discussing the platform’s dynamics in order to find out the reasons why it sank to the bottom of the ocean.”

In other words, Hyperborea may have stretched over the lands that eventually sank into the water?

One of the charts by Gerhardus Mercator, the 16th century Flemish cartographer and geographer, shows a huge continent lying in the vicinity of the North Pole. The land is an archipelago composed of several islands divided by deep rivers. A mountain sits in the center of the land (according to legends, the ancestors of Indo-Europeans lived near Mount Meru).

The question is: How did that land appear on the chart? There was no information whatsoever regarding the Arctic regions during the Middle Ages. We have some reasons to believe that Mercator had used an ancient chart, the one that is mentioned in his letter dated 1580. That chart showed a continent located in the center of the Arctic Ocean, which was pictured ice-free on the chart. Mercator’s chart seems to be based on the ancient chart.”

Assuming that the ancient cartographic information was available for the chosen ones in days of old, has anybody tried to search for Hyperborea in the Arctic region?

“Some of our compatriots participated in the quest for Hyperborea. The Russia Empress Catherine II got some information of the ancient mythical land near the Arctic Circle via the Free Masons. Catherine II organized two expeditions with the help of Mikhail Lomonosov. She signed a secret decree on May 4th, 1764.

The official documents indicated that the expedition headed by Admiral Vasily Chichagov had been dispatched to Spitsbergen to inspect the location for the renewal of whaling and fishing out there. However, the endeavor is referred to as an “expedition bound for the North Pole” in the memoirs by Chichagov’s son.

The Master was ordered to open an envelope with detailed instructions only after his vessel had made for the open sea. According to instructions, the vessel was to head into the direction of the North Pole. Those instructions were penned by Lomonosov, by the bye. Unfortunately, the expedition couldn’t break through the thick ice and had to turn back.”

Why was Catherine II so interested in finding Hyperborea?

“I believe that Catherine, not unlike a few other kings and queens, was enchanted by the prospects of discovering the elixir of eternal youth, which is said to have been invented by the Hyperboreans. Pliny and Herodotus, as well as Virgil and Cicero reported that people in the land of Hyperborea lived to the age of one thousand and enjoyed lives of complete happiness. We shouldn’t forget that the Empress was a woman.”

In Greek mythology the Hyperboreans were a race of giants who lived “beyond the North Wind”. The Greeks thought that Boreas, the god of the North Wind (one of the Anemoi, or “Winds”) lived in Thrace, and therefore Hyperborea indicates that it is a region beyond Thrace.

This land was supposed to be perfect, with the sun shining twenty-four hours a day, which to modern ears suggests a possible location within the Arctic Circle during the midnight sun-time of year.

The earliest extant source that mentions Hyperborea in detail, Herodotus’s Histories (Book IV, Chapters 32–36), dates from circa 450 BC. However, Herodotus recorded three earlier sources that supposedly mentioned the Hyperboreans, including Hesiod and Homer.

The ancient Greek writer Theopompus in his work Philippica claimed Hyperborea was once planned to be conquered by a large race of soldiers from another island (some have claimed this was Atlantis), the plan though was abandoned because the soldiers from Meropis realized the Hyperboreans were too strong for them and the most blessed of people.

Sumerian Riddles and a Precursor Culture With Bizarre Reptilian-like Humanoids