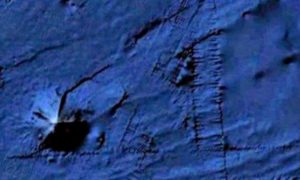 Researcher Scott Waring noticed a huge pyramid near the coast of Japan, which moved and continues to move further directly along the bottom of the ocean.

The ufologist made these conclusions after he found some tracks next to the pyramid, the width of which reached 20 kilometers, and the length – over 650 kilometers.

Waring suggests that it could be an alien ship that landed on the ocean floor many centuries ago. What mysterious pyramid can do at the bottom of the ocean we can only guess.

Just 5 percent of Earth’s oceans have been explored and charted – especially the ocean below the surface. The rest remains mostly undiscovered and unseen by humans. Maybe the oceans are interesting not only for people?

Perhaps, inside the discovered pyramid some technologies belonging to the aliens are still preserved.

Waring is sure that this object must be investigated because it has caused a huge number of questions.

Of course, research will require a lot of money and if the study of the pyramid does begin, then, most likely, all the information received will be strictly classified.