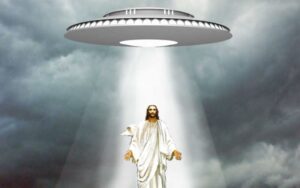 The story of the Three Wise Men had more to it than we thought, a UFO expert has claimed.

UFO expert Richard Lawrence has made the sensationally suggestion that everything the Bible has taught about the birth of Christ is inaccurate – and that even the true date of Christmas is wrong.

A UFO believer has challenged the central pillar of the Christian faith by bizarrely declaring that the son of God was an alien and the story of the birth of Christ involved an alien spaceship.

Richard Lawrence is the author of 11 books about aliens and is considered a “Guru of UFOs” by contemporaries in his field.

He is the Executive Secretary of The Aetherius Society – a relatively new religious movement founded by late British spiritualist George King in the 1950s which aims to spread “teaching on extraterrestrial intelligences”.

Mr Lawrence claims that extraterrestrial life goes to the very core of the Christian faith – suggesting the star described in the nativity story hovering above Bethlehem was in fact a spaceship and that Christ himself came from outer space.

In an eyebrow-raising interview with My London, Mr Lawrence said of Jesus: “I wouldn’t call him an alien, I’d call him a great cosmic intelligence. But yes alien if you’d like.”

He added: “I believe he came from Venus.”

Mr Lawrence and The Aetherius Society claim that Jesus, Buddha, Gandhi and Sophocles were all extraterrestrial beings sent to Earth to help humanity over the course of history.

The London-based UFO expert even went as far as to claim the Bible itself backs up his wild theory.

He said: “Based on the Bible, the Star of Bethlehem was witnessed by three wise men whom one would take to be very credible witnesses”

“It guided them to a specific place. It couldn’t have been a star, they don’t move.
Mr Lawrence – whose published books include UFOs and the Extraterrestrial Message, and Unlock Your Psychic Powers – also says Christmas should be marked in March, not December 25.

He claims Aetherius Society founder George King “was told” this was the case, while the fact that shepherds are referenced in the bible as “watching their flocks by night couldn’t have been doing that on December 25. It would be a spring thing.”