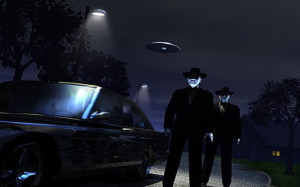 The first known encounter with two ‘Men in Black’ happened in 1947. Two US harbour patrolmen, Harold A. Dahl and Fred L. Crisman, had spotted a UFO over the water of Puget Sound, Washington. Dahl said that a man dressed in black visited him shortly after the sighting and forcefully advised him not to discuss the incident further. A similar meeting happened to Carlo Rossi, from the area near San Pietro a Vico in Italy. In the early hours of 25th July, 1952, Rossi was fishing in the River Serchio when he witnessed a strange circular craft hovering over the river. Rossi hid, watching the craft as it passed over him, and then sped away. In the following weeks he told no-one about what he had seen, but on 15th September he found a stranger dressed in a dark blue suit waiting for him by the river. The stranger spoke Italian, but with an odd Scandinavian accent, and had very strange facial features.

The man forcefully asked Rossi about what he had seen, but Rossi denied everything. Ever since organized flying saucer research began in the early 1950s, a number of UFO investigators have claimed that they have suffered personal harassment, unusual accidents, and even mysterious deaths due to the visitations of three mysterious men in black. In some cases, according to UFO researchers, sinister voices whispered threats over the telephone and warned them to terminate specific investigations. By the mid-1960s, percipients of alleged UFO activity continued to protest that they had been visited by ominous strangers who made it clear that their orders to remain silent about what they had seen would be violently enforced. Official disclaimers by the U.S. Air Force, the Central Intelligence Agency (CIA), and the Federal Bureau of Investigation (FBI) have served only to intensify the mystery of the bizarre incidents that have instilled fear among those who witnessed flying saucer phenomena and have prompted accusations of government cover-ups by members of civilian research groups for over 50 years.

The legend of the three Men in Black, the MIB, began in September 1953 when Albert K. Bender, who had organized the International Flying Saucer Bureau, received certain data that he felt provided the missing pieces concerning the origin of flying saucers. Bender wrote down his theory and sent it off to a friend he felt he could trust. When the three men appeared at Bender’s door, one of them held that letter in his hand. The three Men in Black told Bender that among the many researchers he had been the one to stumble upon the correct answer to the flying-saucer enigma. Then they filled him in on the details. Bender became ill. He was unable to eat for three days. Bender went on to say that when people found out the truth about flying saucers there would be dramatic changes in all things. Science, especially, would suffer a major blow. Political structures would topple.

Mass confusion would reign. In 1962, Bender decided that he would at last tell his story to the world in Flying Saucers and the Three Men. This perplexing volume served only to confuse serious researchers, as it told of Bender’s astral projection to a secret underground saucer base in Antarctica that was manned by male, female, and bisexual creatures. Many questions remained to plague UFO investigators. Were Bender’s experiences really of a psychic nature? Was his book deliberately contrived to hide the true nature of his silencing? Had the whole experience been clothed in an extended metaphor that might yield certain dues to the perceptive researcher?

In the opinion of many UFO investigators, the Men in Black are representatives of an organization on the planet Earth, but they are not from any known bureau in the U.S. government. According to some researchers, both these men and the UFOs come from some civilization that has flourished in a remote area of Earth, such as the Amazon, the North Gobi Desert, or the Himalaya Mountains. Within a few months after Bender had been silenced, Edgar R. Jarrold, organizer of the Australian Flying Saucer Bureau, and Harold H. Fulton, head of Civilian Saucer Investigation of New Zealand, received visits from mysterious strangers and subsequently disbanded their organizations.

A bizarre Men in Black case happened on 18th May 1968, when UFO witnesses started contacting researchers. George Smyth was one of those who had seen a strange object in the skies above Elizabeth, New Jersey, USA. He began to receive visits from strange men, and received phone calls warning him not to attend upcoming UFO conventions or speak to independent investigators. A bizarre aspect of this case was that the three visitors Smyth described were apparently the men he had been told to avoid – the UFO enthusiasts John Keel, Gray Barker and James Moseley. What made this even more odd was that these three men were actually miles away from Smyth’s house at the time of the visits. Other UFO investigators in the area, John Robinson and his wife Mary, also noticed strange things happening to them. A large dark car seemed to be parked outside their house in New Jersey City, with a strange man inside constantly watching them. One day Mary went out and noticed their friend James Moseley making a spectacle of himself further up the street. She thought this was very strange, but went inside to make a drink for him, thinking he was there to visit them. But then the phone rang. To her surprise it was Moseley, not on a street corner in New Jersey City, but at his home in Manhattan.

In recent years, more incidents have been reported. On 15th January 1997 William Shearer experienced a UFO encounter in Essex, southern England. Four days later he had a knock at the door and outside stood two strange men, dressed in dark grey suits and long coats. One man stood on guard by a large imposing saloon car, the other stood at Shearer’s threshold. This man was said to be very tall, deathly pale but with bright red lips, and spoke in a very unusual, almost automated, way. He repeatedly asked to come in but Shearer refused and the men finally said they would come back later.

A month later, Shearer was at work when two men appeared. One was the visitor who had stood by the car at the housecall, the other was a different man. They were both dressed in suits with hats, and they told him they wanted to talk about his UFO experience. They gave him exact details of the incident, details that Shearer felt only he should know, and were forceful in their requests. Shearer asked to see their ID, but the men just kept repeating a formulaic set of questions. In the end, Shearer refused to let them into his place of work and the two men disappeared. However, since then, he has reported blatant tapping activity when using his telephone. John H. Stuart, a New Zealander, picked up a piece of metal that had fallen from a UFO during a close sighting in February 1955.