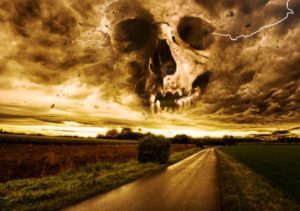 One of the South’s most intriguing ghost stories swirls around a bridge over the Choctawhatchee River at the town of Newton, Alabama. It is a story of the Civil War, the lynching of an unfortunate man named Bill Sketoe (or Sketo) and a “hole that will not stay filled.”

Sketoe’s Hole was a Dale County landmark for many years and became quite famous after Kathryn Tucker Windham wrote about it in her book 13 Alabama Ghosts and Jeffrey, reports exploresouthernhistory.com.

As the story goes, Bill Sketoe was a Southern soldier who came home to care for his sick wife during the darkest days of the Civil War.

He supposedly had hired a substitute to fight on his behalf and was on his way home with medicine for his wife when he ran into men from Captain Joseph R. Breare’s company, usually described as the Dale County “Home Guard,” near the Choctawhatchee River just across from the town of Newton.

Breare and his men accused Sketoe of desertion, a charge that he denied. Despite his claims of innocence, they proceeded to hang him from the limb of a nearby water oak. His last words were said to be a prayer for God to forgive his killers.

Sketoe was a tall man and his feet touched the ground, preventing his death. One of the citizen-soldiers, however, used his crutch do dig out a hole beneath the hanging man. 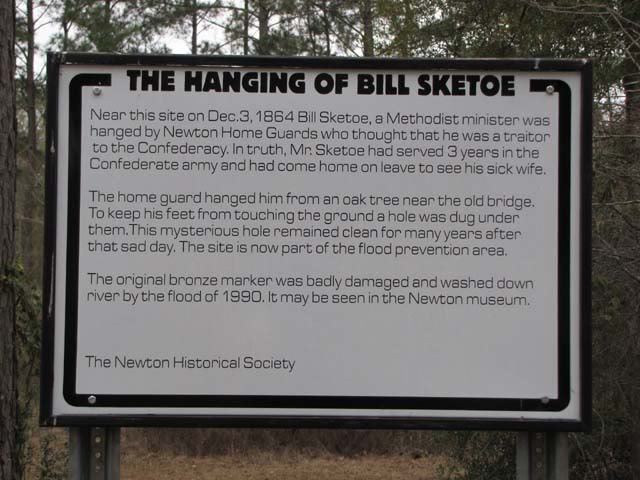 According to the legend, the hole remained long after Sketoe’s body was removed. Local people came to regard it with a sense of horror.

Locals began to notice that the hole dug to facilitate his hanging never seemed to disappear. It retained its original dimensions as years passed: about thirty inches wide by eight inches deep; even when filled with trash, dirt or debris, locals always returned—sometimes within hours—to find it empty.

Campers claimed to have pitched their tents right over the hole after filling it with dirt, only to awaken the next morning to find it seemingly swept clean

The story grew that the ghost of Bill Sketoe still swung from the tree and its dragging feet cleared the hole on a nightly basis.

In 1979, a new highway bridge was constructed over the site of Sketoe’s hanging; his hole found itself beneath the new span. In 1990, after flooding necessitated importation of rip-rap to strengthen the river bank, the cavity was covered with tons of rock. Although the hole itself is no longer visible, the site remains popular with visitors and researchers of the paranormal.

Historical records do indicate that several men were hanged in Dale County, Alabama, in December of 1864 by members of Captain Joseph R. Breare’s company, which was not actually a “home guard” company but instead was a Confederate unit assigned to enforce the conscription or military draft in the region.

Breare was a seasoned military officer who had served with the Army of Northern Virginia for much of the war. Curiously, most of the men he captured during his operations in and around Dale County were sent to serve in the Confederate army.

Those who were hanged were generally accused of helping either the Union army or the “raider gangs” that were made up of deserters and others who regularly attacked towns and homes in the region.