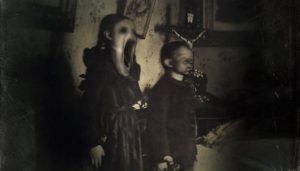 I’ll give you a little family history first. My grandfather was psychic, which was passed on to my mother. I’m not sure about his other seven kids but I think it runs further into my family’s history. My brother is the same, and so am I. I have three older siblings, but we are the only ones affected by it (my brother and I).

He is much more attached to the spiritual world than I am. He sees and experiences a lot more. I’ve always had “bad feelings” about things, dreams that often came true, things like that; but recently I’ve been feeling a deeper connection with one particular “spirit.” I’m not sure what shadow people are, or what their intentions may be, but I hope to find out soon.

My first encounter was a few years ago. Me and my sister used to share a room, my bed was pushed up against the wall near our door. It was about a foot off the ground. My sister’s bed was located directly across from mine against the opposite wall. We had a small room, so a twin bed and a queen sized bed took up a good amount. Anyways, I was laying in my bed about to fall asleep.

It was around 9-10 o’clock at nighttime. It was fairly dark in our room, barely lit, but you could still see the outline of objects. Just as I was about to pass out, I had this strange feeling as if someone or something was watching me. I was laying on my side, facing the wall.

I tried to ignore it but I just could not for the life of me fall asleep. I turned over and noticed this black shadow on the wall near our television. Which was located at the end of my sister’s bed, sitting on a end table. We had one window in our room which was on the wall beside her bed. It moved up the wall to the top of the window, across the top and down the other side to her bed. As it reached her bed, it moved across it and sat up on the edge.

By the time it sat up, it was no longer just a blob, it morphed into the outline of a human. It didn’t have a face, eyes, anything. It was just a black shadow. All of this happened within the matter of 20 seconds. I had never experienced anything like this so I was pretty weirded out. I turned on my lamp and looked back at where the shadow once sat. Of course, it was gone. I slept with my tv on that night. I didn’t have anymore encounters after then until recently.

One night about three weeks ago I was laying in bed and once again had the feeling as if something was watching me. The only light in my room came from my power strip at the end of my bed. (Tiny red light when it’s cut on) My bed lays on the floor, so it’s fairly close to the ground. I look around my room and spot yet again, a “shadow person.” It paced my room, but not for long because I turned my lamp on. I shook it off and went back to sleep. Well a few days later, it happened again.

Most people say they see them in the corner of their eye, then it’s gone. Not this one, it makes itself very known to me. I can feel it’s presence when it’s around, light on or off. I started dating my current boyfriend almost two months ago. He is also connected with spirits. He cannot see them but he feels their presence and has a strong connection with them mentally and spiritually. Last night he was here and said he could feel a presence. He said it wasn’t threatening. All the lights were off but I don’t think the shadow wanted to make itself known at this time. Shortly after we were in my room, I started to feel very anxious and nervous.

It’s usually how I feel before I encounter the shadow. I stood up and observed my room. Above my daughter’s crib was a smaller shadow, but there were tiny orbs mixed in with it. I’ve never seen orbs in my room before, but it was odd. They didn’t stay long, then they disappeared. I told my boyfriend to look but he said he had a weird feeling and wanted to leave my room. Along with the feeling I get, something always happens to my vision. The other night, I had my eyes closed but I could see orange shadow-like blobs. I rubbed my eyes and opened them but it only made it worse.

It took up most of my vision. I looked at my phone and they were gone. I turned it back off and let my eyes adjust to the darkness and there it was, at the end of my bed. The next night, even though my eyes were closed, I could still see everything. As if they were open. I would open them, then close them but nothing changed. Without even looking for him, I turned on my lamp knowing he was with me. I can handle his presence, but last night before I laid down for bed I had this thought; “If you can hear this, then make yourself known in my dreams.

I just want to know why you’re here and I want to know what your intentions are.” About ten minutes later I went to sleep. I had a random, unimportant dream, but I woke up from it and was still dreaming. In this new dream, I was laying in my bed and it was dark. I seen the shadow figure and realized I didn’t have light in my room like I normally do. I was petrified, so I reached up to turn my lamp on. It wouldn’t turn on. So I grabbed my phone and turned it on, it was very dim and I could barley see anything on the screen. Shortly after that I woke up for real. Everything seemed so realistic in my dream though.

My daughter was beside me (she just turned 4 months old) she kept moving as if she wasn’t comfortable. Which is normal for her, but I turned over realizing she was finally asleep. I then felt something pat me on my upper leg. I ignore it thinking it was possibly my daughter just kicking me but then I realized… She couldn’t reach my leg if she was even awake to do so. I turn back over and she’s knocked out. I have no explanation on what it could have been. After I woke up, I felt very cold. It wasn’t until after I left my room, I was warm again. About twenty minutes later when I came back, it wasn’t cold anymore.

It was only that short amount of time where it was freezing. I have ruled out everything possible, except the “shadow person.” I’ve never heard stories of these things being able to physically touch us. It’s odd how this happened right after the dream I had about him. I now sleep with a light on. Just to feel safe I guess. If I didn’t, then I would be able to see him every night. I’m still pretty freaked out about it, but I try to stay calm. It only happens in my room, which is the same room I was in when it first happened a few years ago. Everywhere else in the house is usually lit up when I’m there.

That might be why. But at the beginning of me typing this story, I heard footsteps coming from my living room. I thought to myself “It’s probably just Chris.” (My other brother.) but it was only a couple steps. About two minutes later I heard it again. Our living room/kitchen is completely pitch dark. I turn the flash light on that’s on my phone and go to the living room. My brother is asleep on the couch just as he has been for the last hour. Same position and everything. If it was him, he wouldn’t have had time to lay back down considering I got up pretty fast after the second time hearing it. We have dogs, but they both were asleep on our other couch. I’m trying to piece all of this together. My boyfriend seems to think that whatever it is, it’s attached to me.