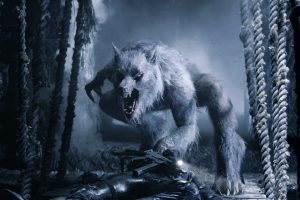 Could it be that werewolves do exist? Science evidences that lycanthropy is a real affliction in which people believe they are lupine beasts.

“Lycanthropy” is derived from the Greek words: lykoi, wolf, and anthropos, man. It’s a mental delusion where people believe they are wolves and is also known as lycanthropic disorder. The person doesn’t actually change from human to animal form.

According to Hollywood myth, people can only become werewolves during the full moon. There are documented cases in which lycanthropes have appeared during other phases of the moon and in daylight.

According to tradition, there are many ways to turn into a werewolf, including witchcraft, a bite of werewolf or the Lycaeonia curse in which people become werewolves because they harmed another person.

Werewolves are alleged to be creatures that hunt at night to feed upon humans or to make them werewolves. The belief in were animals is universal and differs from culture to culture.

There are werecats, werecoyotes, were-eagles, werebears and weretigers. Some lycanthropes are people who believe they were reincarnated as a human but were wolves in their past lives.

There have been many legends about werewolves for centuries. Initially, the stories were meant to amuse people, but through ignorance and superstition, these were replaced by true accounts involving suffering and death.

Peter Stubbe was the first recorded European werewolf. He was also called the Werewolf of Bedburg. He confessed to sixteen atrocious murders. After he killed his victims, he drank their blood and ate their flesh. Not even his son was immune. In 1589, Stubbe was tortured, decapitated and, his body, burned.

Pernette was torn to pieces by villagers in the Alps’ Jura mountain region after she savagely killed a little boy while she was in a spell of lycanthropic insanity. Her kin, Pierre, Georges and Antoinette were convicted, hanged and burned for practicing witchcraft and being werewolves.

One of the most intriguing French cases is the Beast of Gevaudan who terrorized the countryside from July 1764 until it was finally killed by Jean Chastel, who believed the beast was a loup-garou, a werewolf, in June, 1767 after he loaded his rifle with silver bullets and shot it twice.

Ancient Greeks and Romans believed in using exhaustion to cure werewolves. The accused was subjected to long periods of physical activity in the hope of being rid of the disorder. This was based on the idea many alleged werewolves would feel weak and drained after committing their attacks.

In medieval Europe, there were three traditional was to cure werewolfism: medicinally, usually by using wolfsbane, surgically or exorcism. The problem was that many of the cures were fatal to the targets.

A Sicilian belief from Arabic origin is that a werewolf could be cured by hitting it on the forehead or scalp with a knife. Another belief was that piercing the werewolf’s hands with nails was the remedy.

In the German lowland, Schleswig-Holstein, a werewolf could be cured if a person called it three times by its Christian name. One Danish belief was to scold it and convert it to Christianity. Another was to plea to St. Hubert for a cure and protection from the creatures.

There are people who believe they are werewolves. Some of the lycanthropes have been studied and treated by mental health professionals. The November 1975 issues of The Canadian Psychiatric Association Journal reported several cases of lycanthropy. Pseudonyms were used.

A twenty-year-old patient, Harry was convinced that he was a werewolf. While he was a member of the US Army in Europe, he hiked into a forest near his post and took LSD and strychnine, a deadly poison that’s a stimulant when taken in tiny quantities.

He claimed to have seen fur growing on his hands and felt it on his face. He felt compelled to eat live rabbits. He was in this delusional state for several days.

A tranquilizer, chlorpromazine, was prescribed and he was in therapy for about nine months.

He heard disembodied voices and experienced satanic visions. He claimed to be possessed by the devil and contended he had extraordinary powers. Tests indicated his delusions were symptoms of schizophrenia or toxic psychosis.

He was given an antipsychotic drug. When he improved, he was referred to an outpatient clinic. After two visits, he stopped taking the medication and quit treatment. Efforts to contact him failed.

Thirty-seven-year-old Wally was admitted to a hospital after repeated displays of bizarre behavior, including sleeping in cemeteries, howling at the moon, allowing his hair and beard to grow and lying in the middle of highways.

He had no history of drug or alcohol abuse. He had been a farmer and had average intelligence, as evidenced by an IQ test he took when he was in the US Navy.

Wally was diagnosed as psychotic and intellectually challenged, with a mental age of an eight to ten-year-old child. Doctors performed a brain biopsy because of his increasing dementia. There was an abnormal physiological deterioration of his cerebral tissue.

The diagnosis was chronic brain syndrome of unknown origin. When he was prescribed antipsychotic meds, he showed no further symptoms of lycanthropy and exhibited childlike behavior.

There are the recorded cases of werewolf during the medieval era and modern scientific evidence that lycanthropy exists. While the Diagnostic and Statistical Manual of Mental Disorders, Text Revision DSM-IV-TR, the manual that mental health professionals use to make diagnoses for billing purposes, does not have a psychiatric disorder listed as lycanthropy or werewolf disorder, there are delusional disorders and schizophrenia in it.

The Wisconsin Werewolf, also called the Wolf of Bray Road, made the news in modern times. It was continuously sighted since 1936 and was approximately six feet tall, built like a muscular man, covered with shaggy hair and had three long claws on its hands. Its eyes glowed yellow.

The creature looked like no known animal. There were a number of unusual encounters between 1989 and 1992. Eventually, the sightings died out, but left many unanswered questions. What was the creature?

Some people suggest the werewolf is a cryptid, an Unknown Mysterious Animal, UMA, like Big Foot and the Loch Ness Monster. There have been sightings and other evidence that the creature exists, but none have been captured or killed in modern times.

Is it possible that the medieval accounts were a form of mass hysteria, like the witch hunts and executions of the Burning Times that lasted from the Dark Ages into the nineteenth century?

There is scientific proof that delusions and hallucinations exist, as part of psychiatric disorders.

The debate continues as to whether or not werewolves belong in the realm of the paranormal or in the speculative science of psychology….