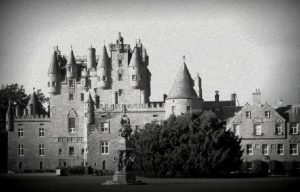 Scotland’s Glamis Castle, built in the 1300s, is the oldest inhabited citadel in the country. Originally, the castle was the home of the Lords of Glamis, who, according to lore, drank and gambled the family fortune away.

During the mid 1600s, Patrick Lyons inherited the ruins of the citadel. He rebuilt it and the family fortune. In honor of this, he was made the Earl of Strathmore. In the 1700s, the Glamis’ dynasty’s wicked lifestyle returned. Allegedly, Glamis is host to a monster, ghosts and a vampire.

Legend has it that, in the early part of the nineteenth century, the first born son of the eleventh Earl of Strathmore was grossly misshapen and referred to as The Monster. He was egg-shaped, with a large hairy body, no neck and small arms and legs.

He was kept in a hidden chamber and was thought to die soon. His existence was only known by the earl, his second son, the family lawyer, the estate’s property manager and trusted servants who tended him.

The estate was, illegally, inherited by the second son. Each succeeding heir was shown The Monster on his twenty-first birthday. It was alleged that the hapless being died sometime between 1921 and 1941.

There is no hard evidence that The Monster existed; however there are documents about a secret chamber, with an unknown location, deep within the castle. An 1880 Scottish newspaper had an article about a workman who accidentally knocked through a wall that revealed a secret hall to a locked room.

He vanished after he told the steward about the incident. There were rumors that he was given a lot of money and was relocated to Australia.

The man was Alexander, the fourth Earl of Strathmore who lived from the late from the late 1600s to the early 1700s. According to one legend, he was a Lord Glamis and gambled with two chieftains in the tower. They argued and cursed God. The devil materialized and decreed they would play dice until the Judgment Day.

The other legend is that Earl Beardie got inebriated on a Sunday. No one would play cards with him, so he challenged the devil to gamble with him. The devil accepted the challenge.

They went into a small room and swore and shouted – until the earl realized he gambled away all of his money and sold his soul to his opponent. The devil vanished, taking Beardie’s soul with him. The earl was said to have died five years later.

People have sighted Beardie’s ghost in various parts of the castle and have heard loud voices swearing and stampings emanating from the vacant tower.

Janet Douglas, wife of James, the sixth Lord of Glamis, was accused of poisoning her husband, who died shortly after eating breakfast, although there was no evidence of the crime.

In 1537, she was accused of trying to poison King James V of Scotland. She was found guilty and burned at the stake on Castle Hill in Edinburgh. People have seen her ghost, wrapped in a scarlet glow or flames, above the clock tower.

Other haunters are the Grey Lady who has been seen in the chapel, a crazed man who walks on the roof by “The Mad Man’s Walk” on stormy nights, a tongueless woman on the grounds, a black boy who sits by the Queen Mother’s sitting room, Jack the Runner who races towards the castle, a tall cloaked figure and a sad woman who looks out of an upper floor window.

Glamis Castle: Poltergeists and a Vampire

There are inexplicable rappings and hammerings and a door that opens by itself nightly, no matter how it’s barricaded or secured. Overnight guests reported something ripped their covers off of them. These are typical poltergeist activities.

Allegedly, the vampire is a maid who was caught sucking blood from a victim. According to legend, she was walled up alive in a hidden room where she is the deep slumber of the undead.

The setting for William Shakespeare’s fictional play, Macbeth was in Scotland and featured the citadel. This was the seed for one legend about Glamis. King Duncan was murdered in the castle. Some people believe the legend that Macbeth’s ghost haunts the castle.

There’s another legend that King Malcolm II, who died in 1034, was murdered in the castle and his bloodstain couldn’t be removed from the floorboards, so the floor was boarded over. The structure was built centuries after his murder.

These legends, along with those about Earl Beardie, the vampire and, most likely, The Monster, are folklore, now called urban legends. It’s possible that a deformed baby was born, then people added details to create a legend.

The La Noria – Most Haunted Cemetery in Chile