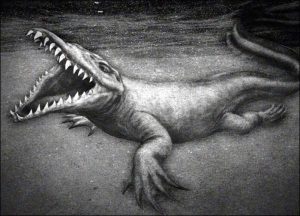 Of the many amazing and hideous mystery beasts on the planet, nothing is loved by its neighbours quite as much as ‘Whitey’, the White River Monster.

Actually, Arkansas State Legislators have announced the area where it has been most often seen – around the town of Newport – a ‘White River Monster Refuge’. It is now illegal to ‘molest, kill, trample or harm’ the legendary beast. But this has not always been the case – originally locals wanted to dynamite the monster.

Whitey’s first appearance was in the 1890s. Next, he reappeared in 1915, but it was only in the first week of July 1937 that he really made a splash. Men fishing in the White River, a tributary of the great Mississippi, noticed that they were finding it hard to land many fish.

One day they spotted a strange creature in an eddy, and reported it to the local plantation owner, Bramlett Bateman. Bateman was sceptical, but agreed to have a look at whatever they had found. He was shocked at what he saw. A monster with the skin of an elephant, four or five feet wide by twelve feet long, with the face of a catfish, was lolling on the surface of the water.

Bateman felt this beast was a threat to his crops, and applied to local officials to blow up the eddy with TNT. The authorities refused permission, and by then hundreds of people had heard of the phenomenon. They came from as far away as California, some with cameras, some with explosives; one man reportedly brought a machine gun.

A plan to capture the monster with a giant net fell by the wayside, and Bateman’s use of a deep-sea diver to find the creature came to nought. As people lost interest in the beast, Bateman felt he was being accused of creating a hoax although there had been over 100 confirmed sightings recorded during the short period of excitement.

Whitey was forgotten, but he made a dramatic return in June 1971. A man was fishing with two friends when suddenly a great fountain of water spurted in front of them and a creature with a 20-feet-long spikey back was seen to surface and then disappear beneath the water.

The man managed to take a photograph of the beast, which he sold to the Newport Daily Independent newspaper. People who saw the picture were unimpressed by its clarity and the newspaper has since lost the original copy.

However, numerous other witnesses saw a long, grey creature surfacing in the water of the White River. Some said it was the length of a boxcar, that its smooth flesh looked as if it was peeling. Others said it made a bizarre noise, like a cow’s moo or horse’s neigh. Those who managed to see the beast’s face in detail told of a strange tusk protruding from its forehead.

A trail of peculiar 14 inch tracks were found on the nearby Towhead Island, and a CBS news team was duly despatched to report on the area. The last reported sighting came in late July when two people out fishing claimed their boat was rocked by what they believed was the monster.

Media coverage killed off sightings of Whitey, and in February 1973 the Arkansas Senate passed its resolution to protect the beast.

From the accounts witnesses have provided, some experts believe Whitey may be a lost elephant seal. They can be immense creatures, up to twenty feet long, and the descriptions of noise, skin and forehead horn would all fit correctly. It is also known that the elephant seal migrates seven thousand miles each year so it may just be off-course.

However, the nearest seal colony lies on the west coast of America, so it would have to come through the Panama Canal to reach the White River. Also, elephant seals only live for around fifteen years, so no single animal could possibly account for sightings over almost a century.

Whatever Whitey is, he can be assured of a warm, if not explosive, welcome the next time he pops up in Arkansas.

Chupacabra: The Whole Truth About The Most Horrible Creature