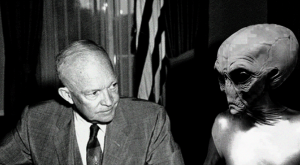 Timothy Good, a previous consultant to Congress and the Pentagon, made a strong claim; he declared that President Dwight Eisenhower met with aliens back in 1954.

In accordance to Good, Eisenhower and FBI officers met with extraterrestrials on three different events, and made initial contact with the space Eisenhower and the aliencreatures via “telepathic messages.” The two sides—human and alien—reportedly met at the Holloman Air Force base in New Mexico, and there were “many witnesses.”

The two parties finally met up on three separate occasions at the Holloman Air Force base and there were ‘many witnesses’. Conspiracy theorists have circulated increased rumours in recent months that the meeting between the Commander-in-Chief and people from another planet took place.But the claims from Mr Good, a former U.S. Congress and Pentagon consultant, are the first to be made publicly by a prominent academic.

Speaking on Frank Skinner’s BBC2 current affairs show Opinionated, he said that governments around the world have been in regular contact with aliens for many decades.

On the night of February 20-21, 1954, while on a vacation to Palm Springs, California, President Dwight Eisenhower went missing. It is speculated he was secretly taken to nearby Edwards Air Force base for an alien encounter. His official statement was that he had to undergo an emergency dental treatment and visited a local dentist.

While physical confirmation lacks, there is plenty of circumstantial and testimonial evidence to suggest this meeting actually occurred.

Over the years there have been several confessions coming from people who claim they witnessed the event firsthand. One of them is Gerald Light, a famous metaphysical community leader at the time. Light says his involvement was gauging the effect this breakthrough would have over the general public.

“My dear friends: I have just returned from Muroc [Edwards Air Force Base]. The report is true — devastatingly true! During my two days’ visit I saw five separate and distinct types of aircraft being studied and handled by our Air Force officials — with the assistance and permission of the Etherians! I have no words to express my reactions. It has finally happened. It is now a matter of history,” wrote Light.

According to Light, several other important figures were present at the meeting. Among them was Eisenhower’s chief economic advisor, Dr. Edwin Nourse. If he had been present, he would have done so in order to offer his expertise on the potential economic impact of a first contact with intelligent alien life. Light also said several trustworthy religious leaders had participated, their roles being obvious.

A number of other sources support Light’s claims. Notorious whistleblowers have put forward their testimonies, describing two sets of meetings involving different extraterrestrial groups. While the first contact did not lead to an agreement, subsequent meetings did, giving rise to interactions with said alien races.

According to former Naval Intelligence officer William Cooper, large objects moving towards Earth had been discovered in 1953. First believed to be asteroids, it was later determined they were actually space ships. Two different missions, Project Sigma and Project Plato managed to establish contact with the extraterrestrials, through binary code.

The treaty stipulated that the aliens would not interfere in our affairs and neither would we interfere in theirs. Their presence on Earth would be kept a secret. They could regularly abduct humans for medical and development purposes as long as they would not harm them. The humans would then be returned to their abduction point, with no memory of the event.

Their demands were that humans dismantle and destroy its nuclear weapons arsenal. They warned humanity about its path of self destruction and condemned the fact that we were killing each other, polluting the planet and wasting Earth’s natural resources.

The committee met their demands with extreme suspicion and prejudice, believing that nuclear disarming was not in the best interest of the United States and that it would leave the world helpless in the face of an alien threat. Eisenhower rejected their proposition.

Another witness to the meetings was John Lear, the son of the creator of the Lear Jet, William Lear. According to him, the Nordics offered their help in eliminating the Greys’ threat but President Eisenhower turned it down because they offered no technology.

Did this meeting really take place? If so, it appears to confirm the current world-wide UFO phenomenon. However, more than 60 years after the alleged First Contact, an official disclosure is unlikely to be heard in the near future.