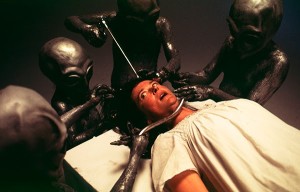 Because aliens are supposed to clean the minds of their victims, what actually happens during an abduction is often only revealed through regressive hypnosis or piecing together known facts. Nevertheless, the stories which occur all follow broadly similar lines.

Generally, the abductor feels compelled, or is forced, to go into an alien space-craft where they encounter the visitors. These are often described as being small, grey figures with big black eyes and a hairless body. They are frequently reported as having large skulls and they communicate with their human captive using telepathy. The message sent to the man or woman tells them not to be scared, that they will not be harmed.

The candidate is scanned, or examined, and then placed on an operating table. This part of the abduction is often a blur, even during the hypnosis, but it seems the aliens perform a series of tests and a recurring theme is that they do extensive sexual experiments on their subject. The abductee’s body is prodded, probed and manipulated. Some even report having tracking devices or other equipment implanted under their skin.

The human is returned to wherever they were picked up, often remembering absolutely nothing. Consequently they are left in a state of perplexion as they realise a number of unaccountable hours have passed. The physical effects are said to be striking. A lot of people are bruised all over their bodies, and suffer painful headaches the next morning. Abductees often have terrible nosebleeds and bizarre but small puncture wounds at points on their skin. They are also said to pass strange urine the next morning. Female abduction victims are especially prone to suffering sexual pains. In all cases, an extreme sense of fatigue is felt.

The psychological results are often even more extreme. Some people feel as if they love the aliens and have been enriched by contact. These abductees believe the visitors have come to warn us and help Mankind protect the planet. But these types of experiences are in the minority. Many feel a sense of violation and despair, very similar to rape victims. Often it is mixed with confusion, disbelief and a sense of possible insanity. Many abduction victims need counselling to regain some sense of stability and, in cases of extreme trauma, have been known to commit suicide. Nevertheless, many researchers wonder if abduction memories are themselves caused by psychological problems, rather than the reverse.

The first time alien abductions entered the public consciousness was in September 1961 when Barney and Betty Hill were reportedly captured by strange beings. The Hills gave an account under hypnosis a few years later that revealed all manner of strange experiments had been performed on them. Betty had seen the aliens inserted a probe into her belly button, and Barney claims he was forced to provide a sample of his sperm. The one incongruous detail they did provide was that the aliens, rather than having large black eyes, actually had ‘wraparound’ receptors. Sceptics point out that the Hills’ testimonies were given less than a fortnight after a television episode about aliens with wraparound eyes.

This factor is one that repeatedly features in abduction stories. The descriptions of aliens and their craft are often identical to stereotypical, 1930s style cosmic invaders. No details have been revealed which could not have been derived from the imagination of a comic book writer. Similarly, no souvenirs have been brought back from the any craft visited by humans. However there are also a few examples featuring extremely disturbing physical evidence.

One is where a pregnant woman was abducted by aliens who removed her foetus. Although she had previously gone for an ultrasound that had confirmed her unborn children was present and doing fine, when she went to the doctors afterwards, it had simply disappeared. The second example involves people who have actually found alien implants in their body. There is even a rumour that a private clinic in California has removed a number of strange implants from abductees’ bodies. If these types of stories are true, there can be no denying that alien meetings leave physical scars on the victim.

The reported evidence on the bodies of abductees is hard to dismiss, and if an implant is ever officially removed and studied, it could act as conclusive proof. Until then, many scientists are going to be sceptical that this phenomenon is nothing more that the product of imaginations easily prone to fantasy.

Will We Know Alien Life When We See It?