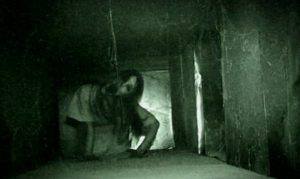 What view do you or paranormal investigators have regarding the question, am I being haunted by a ghost or is it a demon?

With all of the paranormal shows on television, there is some controversy about what these paranormal researchers are really dealing with. On one hand many paranormal enthusiasts insist there are measurable, documentable ghosts that are not demonic in nature.

On the other, when talking to Christian fundamentalists they will tell you there is no such thing as a disembodied spirit, the apparitions are really demons in disguise.

We’ve seen the shows, paranormal researchers heading into a home or business armed with their infrared camera, EMF meters, EVP recorders with the hope to get evidence of a ghost.

Generally they are looking for physical evidence such as an actual apparition that can be recorded on camera, possibly a recording of an unexplained voice or digital evidence of a cold spot. Many groups will also use a medium (someone who can pick up on the thoughts, voice or feelings of any lingering spirits).

While there is wide disagreement on the different variations of what ghosts are, you can certainly find some common themes. Most will agree that a ghost is a disembodied spirit, in other words someone has died and either due to violence, unfinished business or just not understanding or accepting he has died refuses to move on or “cross over.”

They would say that most hauntings are pretty harmless and only need to be addressed if they are interfering with the living’s normal daily life in a negative way.

Others will say it’s merely residual energy where the atmosphere or surrounding record specific events of a person’s life and reply those events over and over again. This means there is no real though process behind it, similar to a movie or voice recording. Of course there is also the poltergeist, which is really a manifestation of a specific individual’s psyche.

In the paranormal investigation world, there is ample room for the involvement of a demon, or a haunting by a creature that was never human. An entity would only be classified a demon in very rare instances.

The haunting would begin slowly with the demon possibly pretending to be nice or benevolent. Over time this will change with strange events like items moving seemingly on their own, things falling off the walls or blankets being yanked off the bed.

As fear grows in the household, it becomes more violent, with scratching or hitting, causing people to become more depressed or thinking harmful thoughts.

Obviously there are more classification and levels of ghostly activity, you can see the evidence tells researchers that there are variations and that some ghosts can actually be if not beneficial, something you can live with peacefully.

From a fundamentalist Christian perspective, there is no such thing as a benevolent or not so benevolent ghost. There are simply demons and angels. If an entity is not teaching the love of Jesus, it’s demonic no matter how “nice” it seems. After all, Satan disguises himself as an angel of light. (2 Cor. 11:14)

While Christian investigators will use the same equipment to record evidence, they will walk into a haunting with the perspective that if there is something there, it’s demonic. They will not use mediums because they firmly believe that while the medium guide is hearing from spirit entities, those entities are simply minions of Satan.

This view is based upon Biblical scriptures that say “For we wrestle not against flesh and blood, but against principalities, against powers, against the rulers of the darkness of this world, against spiritual wickedness in high [places].” (Eph 6:12)

Likewise, they will tell you of the warning “Give no regard to mediums and familiar spirits; do not seek after them to be defiled by them: I am the Lord.” (Lev 19:31)

There are many verses in the Bible warning about spirits and demons making it clear that the spirits we encounter are not to be trusted.

Generally speaking if someone is suffering with a haunting the Christian paranormal researcher will first use scientific methods to determine if there is actual paranormal activity occurring or if there are natural explanations to the events. This can range from psychological issues to physical issues.

However, if it’s determined to be paranormal, there is only one thing to do and that is rid the home, business or person of the entity. Since they do not hold that some entities are harmless ghosts, allowing a “friendly” ghost to remain simply isn’t an option.

While there is no concrete physical proof who is correct regarding ghosts and what they are, each camp does generally agree that there are such things as demons.

If you’re experiencing a haunting, whether you choose an investigative group that is strictly scientific or spiritual in the broad sense or based on a strictly Christian view point really comes down to your own spiritual belief system.

With the popularity of the various ghost hunting shows, paranormal investigators can be found in almost every area of the United States. Be sure to research any group before bringing them into your home, after all they will have free rein to wander through your house.

Be sure to ask them what world view they’re coming from, most will honor your personal belief system and conduct the investigation accordingly.