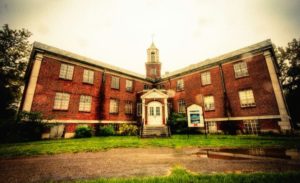 There is a place in E. Bethany, New York of which you should be afraid, be very afraid. It is the Rolling Hills Asylum located between the cities of Buffalo and Rochester. The brick building itself is huge 53,000+ sq.ft. To understand how a building may or may not become haunted or evil or why the dead won’t rest it is usually best to begin with its history.

This place started out as The Genesee County Poor Farm. In the 19th and early 20th century it was common to establish poor farms in the United States. Able-bodied residents were required to work on these farms. Who was housed there?

The unlucky were orphaned children, families with no place to go, the elderly and destitute, those who were physically handicapped, the mentally unstable, those who were morally corrupt and even criminals.

A poorhouse was also referred to as an almshouse or asylum and was run by the local government of the county or municipality in which the poorhouse was located. This was all prior to the 1930s when the Social Security program was adopted.

So the Genesee County Board of Supervisors met in Bethany on December 4, 1826 to discuss establishing a County Poorhouse. The site they selected was a brick building which had previously been a stagecoach tavern. It was located on the corner of Bethany Center Road and Raymond Road and it represented the geographical center of the county.

The poorhouse was to open its doors on January 1, 1827. The Genesee County Poor Farm or The County Home became a self-sufficient working farm and woods which provided food and fuel. In 1871 it cost about $1.08 to care for each person per week.

All of the residents on the farm were known as inmates. Those who were able to work the farm and there were those who built and made wares to sell so as to help with the living expenses.

Part of the chores included raising Holsteins, pigs, draft horses, chickens and ducks. Vegetables and fruit were grown. Jams, jellies and meats were canned. There were even a bakery and a woodshop where coffins were made to be used when needed and to sell to the local mortuaries.

Those who had no family would be buried by the County and at one time there was a cemetery on the property but no records of it exist. As it often happens the cemetery faded away, stones crumpled, grass grew and the forest was replanted.

On June 6, 2004, a memorial site was created in Genesee County Park when five headstones dating from 1887 to 1888 were returned to the County. A historical marker was dedicated by the Genesee County Historians to honor those who had died while living in the County Home from 1827 until the facility closed in 1974. Residents who were still living there in 1974 were relocated to new facilities in Batavia.

This place became known as The Old County Home & Infirmary in the 1950s and in the 1990s after it had already closed shops were set up here and later an antiques mall. This was when the unusual started happening. Property owners, vendors and shoppers started noticing strange occurrences.

There were reports of disembodied voices, doors which were mysteriously held shut, screams heard in the night, shadows of people and more. A paranormal group was called to investigate and the spooky reputation of Rolling Hills was born. In 2002 Jeff and Lori Carlson purchased the property and Lori began noticing paranormal activity such as doors slamming of their own accord, voices that called her name and misty apparitions.

In September of 2007, Suzie Yencer, Rolling Hills resident investigator had a chilling experience. While working a public hunt there was a gentleman who at that time was filming a documentary about the building. He wanted to conduct an experiment in one of the rooms. His chosen room was in the basement and was known as The Christmas Room. His experiment involved sitting in the room with no lights or equipment turned on.

The only light that they would use would be a pink glow stick in the middle of a circle of people. Placed In the circle was a small ball and a toddler-sized rocking horse. The gentleman who was conducting the experiment requested that only Suzie Yencer was to speak and to try to make contact with the spirits. As she continued to talk more and more strange occurrences began to happen.

The glow stick began to move back and forth and the rocking horse began to rock slowly. Then a few of the guests in the circle as well as Yencer saw a hand and arm come out of nowhere reaching for the ball in the circle. Then just as quickly the hand and arm vanished. She has said that the most exciting part of the experiment for her was when she began talking to the many young children’s spirits which were around her. She asked them to come into the circle and play with the toys there.

Yencer put her open palm over her shoulder and asked the children to take her hand. She then would help them into the circle. As each child took her hand her hand would begin to tingle and as she lowered her hand into the circle the other people sitting about would say that they could see what looked like glitter floating above her hand.

This continued for about 30 minutes when there was a bang on the closed door of the room and a voice yelled “it is time to close!” It was then that they all realized that they had been in that room for about three hours.

The Christmas Room is so named because it is permanently decorated for Christmas. There is a Christmas tree and in this room toys are often moved from place to place as if someone would be playing with them. Apparitions of children have been seen here and orbs have shown up on photographs taken in this room.

On the 1 st and 2 nd floors in the East Wing shadows are often seen between 3 and 5 AM. Also on the 2 nd floor of the East Wing there have been sounds of footsteps and sliding sounds heard from above.

The only problem here is that there is no 3 rd floor. In the corridors of the East Wing a ghostly man has been seen with a goatee beard and mustache walking about. From the Music Room in the West Wing music has been heard but upon investigation, the room is always empty.

Rolling Hills Asylum appears to be the most haunted location in the northeast. The investigations continue and it is no wonder that there are spirits of the dead here as more than 1,750 occupants died on the premises and many of them were buried on the property as well. They still roam the halls of the asylum and if you are an investigator they will be waiting to meet you.