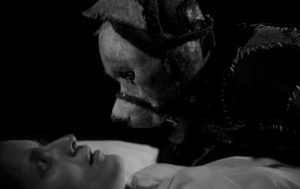 Anomalien.com reader Lizzy Sordino shares her story about an encounter with the unexplainable.

When I was about sixteen going on seventeen, my parents rented a small house. This place was old when I lived there. The house was built in the 1890s and had everything you needed to live there.

Anyways, about a month after we moved in I noticed things being misplaced that was nothing really and I didn’t really think much of it, but maybe I thought I put an item in a spot when really I didn’t.

It wasn’t until much later did anything really happen, it was a slow progression and build up of what was to follow. At times it smelled like we had a bad sewage back up somewhere under the house.

My father checked our plumbing and everything was fine. The smell continued from time to time, so we just learned to live with it. I started having terrible nightmares and eventually, I wouldn’t even sleep.

I started failing in school because of this. The only time I actually got a decent nights rest was when I’d stay at a friend’s house on the weekend. One night I was awake and went into the living room to keep from falling asleep, I had a sharp burning pain shoot down my back.

I remembered screaming in agony because the pain and burning were so intense. I had no other choice but to scream. My Mom and Dad ran from their bedroom into the living room and at this point I was on the floor still screaming, but I didn’t voluntarily get on the ground, I was being forced down on the ground.

My parents’ eyes were big and my Dad, who is a very strong and tall man, went to pick me up and he was thrown onto the couch. Mom was in shock; she just stood there with a sheer terror look on her face.

I continued screaming until whatever had forced me down let off. Dad got up and picked me up. I was crying and screaming Dad couldn’t understand me. Once I was able to talk I said I felt a sharp and burning pain and it hurts really bad. He stood me on the ground and lifted the back of my shirt up.

All I could hear was my Mom saying “oh my god, oh my god” over and over. I turned around and Mom said I had scratches and a really big scratch down where my spine is. I noticed my arms and belly also had been scratched.

I started crying again and when I yelled out leave me alone, we heard the creepiest growl come from somewhere in the living room like a big dog was hiding. Mom and Dad figured it’d be a good idea to leave now, and get our things in the morning. So we took off that night and stayed in a hotel.

The next day I remembered us getting all our things and the owner of the house stopped by and asked why we were really leaving, and my Dad explained and the owners eyes got huge, he couldn’t talk for a second, but when he could, he told us that the house was a church at one point, but it was a church for satanic worship, and a few people had died here from some sacrifice.

The owner wasn’t upset that we were leaving he understood completely. To this day when I tell people this story they get creeped out and other people ask why wasn’t I possessed since it was a demonic haunting?

I just tell them I got away before it could do anything more. I’ve never had anything like this happen ever again. Thanks for letting me tell my story, I hope it helps other people with a demonic haunting out and find comfort that they aren’t alone.