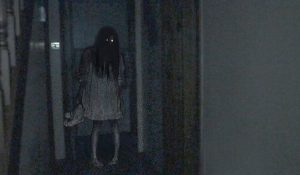 According to a recent Associated Press poll, approximately 34 percent of Americans say they believe in ghosts. Just what kinds of beings fall under that ghostly spectrum?

As mentioned in the Trivia-Library, Marquise du Deffand, a brilliant French woman of letters (1697-1780) had an interesting way of looking at the afterlife (that still aptly sums it up for many in the current, non-ghost-hunting population): “Do I believe in ghosts? No – but I’m afraid of them…”

Whatever people believe or don’t believe, they cannot deny that ghosts have been documented in some form or other for thousands of years. That truth, in its own right, is quite telling.

A ghost can appear as a full-sized person (apparition), completely dressed and moving around a structure or grounds (quite a rare sight) or it can be seen as a shadow, or maybe a wispy, filmy thing, like a fog or mist or ectoplasm.

It can also be invisible (much more commonplace). The Witches Tower in Kettering, Ohio, for example, has been the scene of several apparitions, including that of gowned woman floating atop the turret.

Sometimes it’s reasoned that the “being” has unfinished business holding them here. Perhaps it is a yearning to remain “home,” at a familiar, beloved place. Alternatively, it could be something that could involve the being seeking some sort of justice or, even more unnerving, attempting to enact a form of revenge.

Some believe that there are those who’ve done malicious deeds while of human flesh and body and thus have stubbornly avoided continuing onwards and upwards (or is it downwards?) following their death. The thought of purgatory or hell waiting around the next bend keeps them staunchly grounded on the earthly plain.

Paranormal researcher Fiona Broome convinced that there are, in general, three main common types of hauntings:

According to Broome, “residual energy hauntings” are by far the most common. “They are just a location that “feels” haunted,” Broome explained. “There may be some activity, and even an apparition or two… but it’s the same thing, every time.

The activity usually occurs on a certain day or date, and sometimes at a particular time. Or, it might be activated by a specific trigger, such as when a certain song is played on the radio.”

“The (active) ghosts will respond to modern-day events in its vicinity. That is, if you talk to the ghost, it will respond or at least pause what it’s doing,” she noted.

Broome indicated that, “Most ghosts are identified by what they do, the impressions that they make upon witnesses, or anomalies measured with scientific equipment and cameras or recorders.

In general, ghosts can appear anywhere, but history – and perhaps geography – usually provide good reasons why the site may be haunted.”

“Poltergeists are a controversial topic among ghost hunters and parapsychologists,” shared Broome. “Some people believe that poltergeist phenomena is psychokinesis (also called PK) or telekinesis.

That is, it’s caused by someone who is very much alive and has elevated abilities related to ESP. According to this theory, people are able to move things with the power of their minds, without physical contact.”

Broome, however, noted that she and some other researchers believe that poltergeists are “a two-part phenomenon. The energy for the activity is provided by someone who is very much alive. The pranks and noises are caused by the ghost.”

Whether residual, active or poltergeist in nature, ghosts have been fascinating people for centuries and will continue to do so as long as human beings traverse the earth.