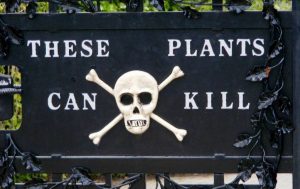 It’s no huge secret that the wealthy do some strange things and take up what would otherwise be strange fascinations from time to time, but when Duchess of Northumberland built her gardens, she really outdid herself. This is not an article about ghosts or hauntings, sometimes the most scary places are waiting to kill you right here in our realm. Welcome to Gardens of Alnwick…

What made the Duchess’ Alnwick Gardens special was not only that she built it entirely with children in mind, but that she filled it with every horrifyingly poisonous plant she could find. In the Duchess’ own words; “I wondered why so many gardens around the world focused on the healing power of plants rather than their ability to kill” It gets even better; “I felt that most children I knew would be more interested in hearing how a plant killed, how long it would take you to die if you ate it and how gruesome and painful the death might be.”

Although Alnwick Gardens has expanded since its original creation in 1750, the original section nicknamed the Poison Gardens is still the main attraction. Upon approaching this portion of Alnwick Gardens you’ll first spot the numerous signs warning “These Plants Kill”.

A well placed warning as Alnwick Gardens houses over 100 species of some of the world’s deadliest flora and fauna. Within its gates you can find many of the familiar poisonous plants such as Foxgloves, belladonna, poppies, and laburnums all of which can kill if ingested, or in some cases have often been manipulated into narcotics over the ages.

However; it also houses more infamous and exotic tenants such as Nux Vomica, which you may know better as Strychnine. Ingesting the plant in any amount will simultaneous stimulate every motor or sensory ganglia of your spinal cord causing violent and agonizing convulsions.

Worse yet is the immediate and extreme rise in blood pressure, which in many would cause severe ruptures throughout the body’s network of blood vessels. The direct description is you writhing on the floor in agony you’ve never imagined possible while bleeding from your pores all over your body. Nux vomica was no doubt a favourite amongst the children visiting Alnwick Gardens.

Even more notable is the presence of Ricinus Communis, a plant so deadly that England’s Home Office had to directly authorize it’s presence when Alnwick Gardens was refurbished in 1997. The beans produced by Ricinus Communis are the most poisonous in the world and may be better known by the name Castor Beans, which in their raw form produce Ricin.

Those familiar with the two World Wars no doubt recognize this name as Ricin Gas; produced by the Americans and Canadians as a biological weapon that would decimate entire armies.

The effects of Ricin whether digested or in its gas form make for a paragraph in and of themselves, they include; a burning sensation in mouth and throat, crippling abdominal pain, extreme nausea, purging and bloody diarrhoea, an extreme increase in heart rate, but a flat line drop in blood pressure, and even if you somehow survive the first few hours you can expect to have uncontrollable seizures for up to a week.

Now that you’ve imagined standing next to either of those two plants, imagine being surrounded by hundreds more just as deadly; this is the Duchess of Northumberland’s Alnwick Gardens built for children.

Are Pets Telepathic? Extrasensory Communication between Animals and Humans