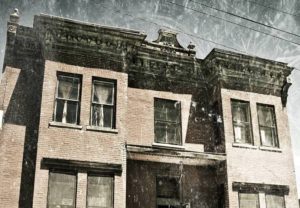 The Dumas Brothel located in Butte, Montana was built-in 1890 and remained in operation until 1982.

It is not surprising that America’s longest running bordello with its history of booze, gambling, prostitution and death is said to be haunted. The brothel with its 43 rooms was a very busy place in its heyday, as silver miners working three shifts per day, made frequent visits to the Dumas.

The ghostly activity at the Dumas runs the gambit of paranormal activity. Reports range from cold spots to being touched by invisible hands. Also, disembodied voices, moaning and groaning and sounds that would be expected at a brothel.

Many photos have been taken that show various manifestations including the mysterious floating orbs which seem to be all through the Dumas. While some ghosts have been identified, most are unknown and believed to be apparitions of prostitutes who died at the Dumas.

One of these ghosts however is very well-known, it is the ghost of former Dumas Brothel madame Elenore Knot.

Elenore Knot had been madame of the brothel for years and was very financially successful. However madame Knot had decided to make a major change in her life. Tired of her role at the Dumas, Knot wanted to get away from it all and just enjoy her life.

She had met a successful man and she believed they were truly in love. Despite the fact that he was married the two planed to runaway together. When the time came that the man was to meet her he was a no-show.

She waited with her suitcase packed but he never arrived. The next morning Knot was found dead in her room at the brothel. She had committed suicide with a combination of sleeping pills and alcohol.

A sad ending for the madame but it appears that she has never given up hope that her lover will soon arrive. The ghost of madame Knot has been seen on many occasions by several witness, she is said to be standing or pacing, waiting with suitcase in hand.

The Dumas Brothel has become a popular tourist spot and has been featured on several of the TV ghost hunting shows. The building itself has changed little over its long history and is a registered historical site. The Dumas brothel is also the last remaining example of a style of architecture known as “American Brothel.”