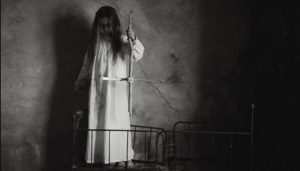 George (anomalien.com reader) shares his story about encounter with the unexplainable

I live in Richmond, VA. If you are familiar with the civil war then you may know that many significant events happened here during the war, and we have many historic landmarks surrounding the city.

Now, in a place like this of course there are going to be many legends… every historical town has them. And of course, me being a skeptic I had to check each one out to see if it was true or not…usually not.

My friend Paul lives in an old house built around the time of the civil war, and right across the street from it is an old battlefield.

I would spend the night there on weekends, and I began to notice a trend.

Every time I would sleep in a room other than Paul’s I would wake up the next morning with bruises and cut all over my body.

Now, I could attribute this to the fact that I am known to be a restless sleeper, but it seemed strange to think that it never happened in Paul’s room. It was late on night on a full moon, and Paul, his brother, and I had just finished holding ritual in the basement. (Let me point out now that we all practice wicca. It is a nature based religion and out first law is “harm none).

We had settled down on the living room couch to watch “Friday” and eventually fell asleep. We woke up at 6am to the sound of Paul’s 17-year old brother crying in the dining room. When we went into the dining room we saw him sitting at the table holding his head which was bleeding heavily.

Paul rushed him to the ER to get stitches and I settled back down to try to go back to sleep. I was almost there when I noticed my leg was wet. When I looked down I noticed that I was bleeding and it was seeping through my jeans.

I didn’t remember the cut and it didn’t hurt, but it was, nonetheless, there.

I went to the downstairs bathroom to clean it up and as I was sitting on the toilet lid I felt the strange urge to go back to the living room. As I entered the living room, the entire thing had changed, there was different furniture and a young brunette girl standing in the middle of the room. At first I didn’t know what was going on so I stood there in shock as a man (maybe later 40’s) with black hair came into the room followed by an elderly priest.

The priest began reciting prayers over the girl as the man stood in the corner and cried. Eventually a woman and another man came into the room, I couldn’t make out their features as my eyes were riveted toward the girl. The others began talking and I heard parts of their conversation over the priest’s prayers.

The more I listened, the more I understood. This young girl was one of the first to be accused of witchcraft in Virginia. She was going through the process of being “exorcised”, and if that didn’t work she was to be sentenced to death.

Suddenly the rest of the scene faded and I was alone in the room (now in the same condition in which I left it) with the girl. She looked at me with a strange feeling in her blue eyes and said “harm none” and then began crying. I couldn’t move, I couldn’t speak. It was almost that I felt if I did it would somehow shatter this vision I was having.

I stood there watching her cry for what seemed like hours until the vision slowly vanished and I was alone again.

Only 5 minutes passed since Paul had left, and when they returned I told them about what I saw. I think they believed me to a point but like me, refused to accept totally anything they hadn’t actually seen. After all, I had no proof.

Until now I’ve kept this to myself, contemplating what exactly happened in that house, and I’ve come up with an idea. Most of our rituals were held in Paul’s room, which may have added energy of a protective sort.

And the cuts and whatnot that appeared after sleeping in a room other than his may be her way of reminding us what happened to her when she stood up for her beliefs. I don’t know for sure, and I probably never will, which annoys me to no extent.

But someday I will find out what happened to that girl.