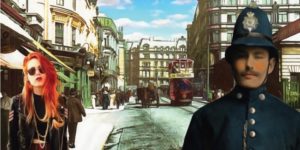 Timeslips are one of the most fascinating incidents in the sphere of the paranormal, but what exactly are they? If you see the ghost of a top-hatted Victorian gentleman, that is a haunting, but if the street around him changes into a Victorian setting too, that is a timeslip.

In my many years of investigating timeslips, I have discovered that here are certain people who, for some unknown reason, are more likely to experience slippages in time.

In 2015, Laurie, a 26-year-old woman from Pennsylvania, came to Liverpool to stay with her friend Sarah in Huyton. Both girls had met via an internet forum about The Beatles and both were big fans of the band.

Sarah took Laurie to the grave of Stuart Sutcliffe, the so-called Fifth Beatle who had been a member of the band before they hit the big time and had tragically died in 1962. Stuart today lies buried in Huyton Parish Church Cemetery, and Laurie left a red rose on his grave.

Laurie and Sarah then went on the Magical Mystery Tour bus, taking in all the old Beatles homes and places mentioned in the songs like Penny Lane and Strawberry Fields.

Sarah soon realised that her American friend was psychic on the very first night she stayed at her house.

Laurie said he had seen glimpses of a family dressed in clothes that seemed to date back to the 1950s or earlier, huddled around a huge vintage looking radio, and the sombre voice on the radio was saying: “I have to tell you now that no such undertaking has been received, and that consequently this country is at war with Germany.”

This was from the historic speech Prime Minister Neville Chamberlain made to the nation in September 1939, informing listeners that Britain and Germany were now at war.

Laurie saw the couple hold hands as they heard war being mentioned and a little red-haired girl said: “Daddy will you have to go and fight?”

The scene then changed and Laurie was back in the living room of Sarah’s house in 2015.

Sarah later heard from an elderly neighbour that the Henderson family lived in Sarah’s house in the war years and they did indeed have a little red-haired girl who sadly died of pneumonia in the 1950s.

Laurie and Sarah went to a club near Chinatown, and when they came out around 2.30 am, Laurie went missing. She found herself in Nile Street – a street that once existed near the Anglican Cathedral. Laurie only knew she’d involuntarily gone back in time when she saw a tram pass the end of the street.

A policeman fell off the back of the tram and smashed the back of his head in on the pavement. There were shouts and screams and Laurie tried to help the policeman, who was unconscious and losing a lot of blood.

Another, younger policeman shouted for a bystander to get a doctor and he made eye-contact with Laurie and seemed to notice her leather jacket, tartan miniskirt, purple leggings and boots. The scene then changed and Laurie found the street and people had vanished.

She was in Lady Chapel Close, made up of modern red-brick buildings. I discovered that Laurie had witnessed an accident which had taken place on 5 March, 1883.

Days after this, Laurie was shopping on Ranelagh Street while Sarah was at work, and suffered a heavy nosebleed. A policeman approached her by the Midland Pub and pinched her nose and calmed her down – then she noticed it was that same young Victorian policeman she’d seen last time – and now Ranelagh Street was cobbled and horse-drawn carriages and tramcars moved along it.

The bleeding stopped and the policeman said: “Why are you dressed like that?”

She told him she was from 2015 and he said a strange thing in reply. “Ah, you’re one of them who keeps coming here. You’re an American. Is that how they dress?”

“My name’s Laurie, what’s your?” she asked. She just had to know, and realised she was falling for him.

“George,” he said, and suddenly Laurie was back in her own time, and she felt heartbroken. She told Sarah what had happened, and said she felt as if there was some link with her and the Victorian policeman – as if she had known him in some previous life.

Days later, Sarah came home from work and found a note from Laurie which said: “Love is the key to getting back there with George. I’ll be gone for some time, but don’t worry. I will return. Love, Laurie.”

Laurie went missing for almost a week, and when she turned up at Sarah’s home she was dressed in Victorian clothes.

She claimed she’d been staying with George in March 1883 and showed Sarah the Victorian currency in her purse.

Sometimes Laurie goes missing for months at a time, and I believe she is not a hoaxer as she shuns publicity and has shown me some pristine objects from the past. I am still investigating the alleged timeslips at the time of writing.