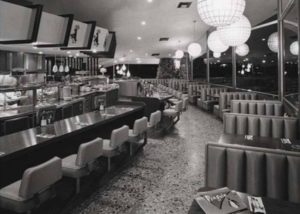 In 1999, Sebastian Raynes was recently divorced and just plain tired. He needed a break and decided to head to NYC for a week of relaxation.

Raynes located a hotel room in the East Village and had plans to spend his time visiting the cities museums and art gallery’s and perhaps see a Broadway show.

On the evening of Raynes fourth day in the city, after seeing the show “Cats”, he was looking for a place to eat when he found a small cafe near his hotel. The cafe appeared to be a 1960′s retro eatery and Raynes was amazed at the detail that had been recreated.

The place appeared to be authentic in every way, including Coca Cola bottles with the name molded into the glass and a waitress wearing a tie dye shirt.

There were only a few people in the cafe, two girls with their boyfriends who both had very long hair, and another long-haired man playing 60′s music on a guitar.

Raynes ordered his food and found that not only were the portions generous, but the food was delicious and the prices were unbelievable. His full meal totaled just $3.25.

Raynes had such a good experience at the cafe he dreamed about the place that night and had every intention of returning. Following another day of sightseeing, Raynes went to the location of the cafe, it wasn’t there.

In the place where the cafe was located was a dark boarded up building that appeared to have had a fire. He was sure that he was at the same place as the previous evening, but just in case he wasn’t, he continued to search for more than two hours but never found the 60′s cafe.

Not about to give up, the next day Raynes went once again to where the cafe had been. As he stood outside the burnt out, boarded up building, he saw a woman who appeared to be in her 60′s.

The two began to talk and Raynes asked the woman if she knew where the cafe was located. She told him that he was in fact at the right location.

The woman said that she had been to the cafe that he described many times, the last time was in the 1974, at the very location where he was now standing. She had not been back because shortly after her last visit the cafe had a kitchen fire and was gutted.

The cafe was never reopened and the building had set empty ever since.