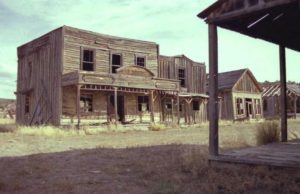 One of the most interesting ghost stories comes from a place we all know well and that is Franconia right in the Coppermine Trail.

Back around 1850 is when settlers came to Franconia Notch and discovered copper. Soon copper mines came about and the new town became a great settlement to come to, but the Natives didn’t agree with the new additions. Of course, this was because the new settlers were on the Natives sacred land.

As time progressed and the copper mine town began to lay the foundation down to make a potential great place to live, the town was plagued from the start with problems that could only be explained as abnormal.

Buildings would be erected, but the roof would be missing the next day, excavated grounds were filled in the next day like it wasn’t even touched, and even the equipment ceased to work like some force was making it stop.

Finally, a local pastor noticed an Indian and asked him what was going on. The Indian told them that they were building their new town on sacred land and that the spirits were warning them to not proceed. The Indian that the pastor was talking to was sent to try and make peace and have a petition signed to move the town a few hundred yards away or tragedy would happen to the town.

Soon, it became a thriving town of 200 people, but the visitors of the night disturbed the town minus the two churches, strangely. Through much warnings and signs, the Indians could not convince the new community to move and show respect for their ancestors, but the town rejected the myth of terror coming to the small town as a fairy tale.

Soon, the Indians left and the townspeople thought they won. They were wrong.

In August of 1859, a great red sky came over the town, thunder shock the Earth beneath their feet and the wrath of the Great Spirits took over the small town.

Witnesses from a ways watched as a cloud formed into a great big hand and smashed down onto the small town and then—all was quiet again and the sky turned blue, but other townspeople from other communities were not prepared for what was to be seen.

The copper mine was collapsed, killing every man working inside. Even stranger, no one was around or found in the town. Smoke was still coming out of chimneys, half eaten food was still on the table, but the only building that was left unharmed was the church where the pastor tried to get the townspeople to get the community to move.

The mining company wanted to reopen the copper mine, but no individual dared to mock the same fate that happened, so the town never resurrected, and thus the buildings crumbled to the ground and all that is left is cellar holes and foundations of the once thriving town in Franconia.