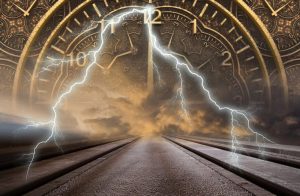 A day trip for Surrey, UK, bookseller Eric Barton and his wife Irina took a very strange twist. The original destination of the couple back in 1954 is unknown, but a missed bus stop and what followed, would mystify them for the rest of their lives. Where they ended up, and what they witnessed, put them in another time.

Although not their original destination, spending the day in Wotton seemed like an excellent idea. The couple soon made their way to the family church of John Evelyn, the Church of St. John. The Barton’s walked the grounds and enjoyed the scenic view surrounding the church before finding what appeared to be an old, little used foot path. After a moment of discussion, the Barton’s decided to see where the path led.

The decision seemed to have been a good one, the old path led to an area with a beautiful view of the valley. The Barton’s sat on an old wooden bench and began to eat the lunch they had packed earlier in the day. Irina was the first to notice something strange, the warm day suddenly chilled, her husband soon noticed it as well. The Barton’s had a general feeling of uneasiness, as if they were suddenly in another place.

Irina then sensed that there were three figures standing behind them, on a hill. As she tried to turn and look, she found herself unable to even turn her head, as if frozen in place. Nevertheless, Irina “knew” the three men were standing behind them and one of them was dressed like a priest. The whole strange incident lasted only a few seconds but affected the couple so much that they would make a point to pay another visit.

Irina returned to the Wotton location in 1956. She found the old path but the spot the couple sat to eat lunch was gone. The area was completely different, there was no wooden bench, even the hill where Irina had sensed the three men standing behind them was gone. Eric Barton’s visit to the site also found no sign of the location he and his wife had stopped two years earlier.

The case of the Barton’s timeslip was investigated by the Society For Psychical Research in 1974.

The SFPR found no historical record of there ever being a hill at the location that the Barton’s reported. The group however did turn up something interesting, in the diary of John Evelyn. Evelyn recorded the execution of three men, one of them a priest, at a location matching the description given by the Barton’s, hill and all.