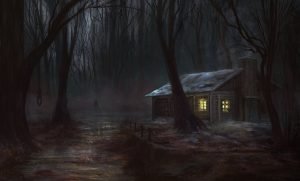 Anomalien.com reader Jasmine shares her story about an encounter with the unexplainable.

When I was 17 I went camping with my family, the weather didn’t turn out the way we thought it was so we decided to stay at our families old cabin in the woods.

It had been years since anyone was there, the first night we were there, I woke up in the middle of the night and saw something in front of me, it was dark, I was half asleep but I know I saw something, a shadow hovering over me. I closed my eyes tight and soon fell back asleep.

The next morning I thought it was just a dream, as I was getting my breakfast I stopped by the mirror in the main room to fix my hair and as I pulled my hair back I saw a black shadow behind me. I jumped and turned around but there was nothing there.

I turned back to look at the mirror and saw in the reflection, at the far end of the room behind me was a black orb, at least that’s the only name I can think of for it, it was black, fairly small and was just hovering in mid-air. I told my parents I wanted to leave but they said because of all the rain, it would be dangerous to drive home.

The next night I was staying up late with my parents who were packing things up a little. Suddenly all the lights in the house went off, it was literally pitch black, I have trouble walking in the dark, I always seem to get dizzy for some reason.

While my parents tried to make their way to the light switches I tried to follow them, suddenly I bumped into someone, it deff’ wasn’t my mum so I assumed it was my Dad, when suddenly I heard my Dad across the room telling my mum to get my sister. I could still feel someone in front of me, and desperately tried to find my Dad.

I eventually found him and stayed close, when the lights finally came back on, there was no one in there but us. I told my Dad what had been happening to me and he believed me, since he himself had experienced things like this in the cabin, since he was a kid when they happened he always believed it was his wild imagination though.

We were set to leave the next day. My parents were putting our stuff in the car boot, I was on the couch waiting while my little sister was already in the car. I suddenly felt something really weird, it would like it felt like someone was sneaking up on me, I turned around and saw at the bottom of the stairs, a dark mist turning to corner into the room I stayed in.

I yelled out for my Dad and he came running. I told him what I saw and suddenly we heard really loud stomping coming from up stairs, it was sound loud the lights actually shook (note: the lights were hanging from the ceiling, not stuck to them).

Then an awful, and I mean awful, smell came over the room, if I could pick the right words to describe the smell, I’d be a genius. It was so rotten and foul, the stomping soon stopped and the dark mist formed by the top of the staircase again.

I saw it before my Dad when he did see it though, he grabbed me and we went outside. He told my mum we were leaving instantly but didn’t tell her why. As we got in the car I looked back through the window and the mist was at the bottom of the stairs not moving.

I don’t know what on earth is in the cabin but I know it was evil, something just didn’t seem right. Its been 10 years now and I’ve never been back to the cabin and as far as I know, no one in my family has.