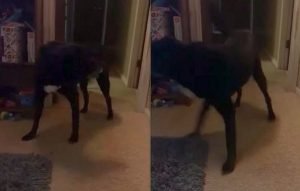 A Reddit user has posted a video in which she claims something unseen is pushing her dog hard after the dog started to worry and bark.

According to the woman, this video was filmed several years ago, when she, along with her young son, was in a room where they also had a dog named Tucker with them.

The footage shows that the dog is afraid of something, Tucker is looking at something that we cannot see, but which is low, almost at floor level, and slightly away from the dog. The dog barks at this mysterious object or force.

This dog’s behavior shows a clear threat. The tail is wagging while barking, the bark is a low bark, and the head is down avoiding eye contact. All of these indicate the dog is avoiding a threat.

Then, in an inexplicable way, within just a couple of seconds, the dog with all its paws at the same time sharply slides across the floor towards the filming video. When movement stops, the dog turns its head back and looks at something invisible, which is probably what pushed it.

And then he barks again, looking away and lowering his head.

The woman recalled that one evening, out of the corner of her eye, she saw some silhouette coming out of the bathroom. Thinking that it was her eldest child who got out of bed, she found that the child was sleeping, as well as all the others who were in the house.

The next day, her husband had a similar experience when he walked past their bedroom and saw what he thought was his wife, but then realized she was actually in the kitchen.

Eventually, the family moved out of the house and all the strangeness and paranormality immediately ended, because of which they came to the conclusion that something was connected with the house itself, and not with any of them.

After they saw the dog’s strange “sliding” in the video, they thought it might be a ghost. The dog may have been able to smell it or even see it with its own eyes.

Skeptical users thought that there was nothing paranormal in a sharp push-slide, it was just that the dog itself twitched like that. Others were sure that the dog could not glide with all four paws like that according to the laws of physics. Because, firstly, there is a completely non-slip carpet, and secondly, the dog did not seem to push off at all.