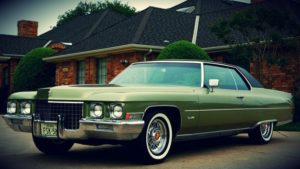 Anomalien.com reader Jason T. shares his story about an encounter with the unexplainable.

This is a story of the very strange goings-on with my 1992 Cadillac Deville.

A few months ago, I’d finally saved enough money to buy myself a car after going two years without one. It wasn’t a lot of money, so I started my search on Craigslist. I would search Craigslist a few times a day trying to find something in my price range. After about a week and a half, I came across a 1992 Cadillac Deville that looked as if it just came off the production line.

Now, me being a Cadillac lover, I wanted to call this person and say ‘Here’s cash. I don’t care what’s wrong with it. It’s beautiful,’ but my gut was telling me it had to be a scam.

So, I called the number listed and asked the man a few questions about the car. He told me the car was so cheap because it was an old funeral procession car (the car that leads the hearse in a funeral procession) and the funeral home had bought new cars for the duty and had no more use for it. Intrigued by that, I set up a viewing and test drive for the next morning.

The next morning rolled around and I met the little old man who I had talked to the day before. The car was as beautiful as the picture on Craigslist, and it ran beautifully. I told the little old man I’d take it and we completed the paperwork. I was still in disbelief that I had got such a good car for so cheap.

A few weeks passed, and the car was still running great but I started to notice odd things. For example, every morning when I got in my car it smelled like a fresh-smoked cigarette. Being a smoker myself, I kinda shrugged it off, but then weirder things started happening.

So, I went back down to turn it off. After doing so, I stood next to my car for a few minutes to make sure the light was really off. When I got back to my apartment, I looked out my window for a third time only to find the dome light on yet again!

Irritated, I went downstairs a third time and turned off the light. I waited 15 minutes, and the light stayed off. Before I got back upstairs, I yelled ‘Are you finally done for the night? It’s getting old,’ and directly behind me, I heard a giggle.

I spun around to see who was laughing at me, knowing how crazy I probably looked screaming at an empty car. I started thinking someone was screwing with me, but no one was around. A little creeped out, I went inside and looked out my window to see if the light was back on. It wasn’t, so I went to bed.

Odd things like this kept happening. One morning, I went down to my car only to find the stuff from my glove compartment all over my car and the car smelling like a fresh-smoked cigarette. It freaked me out. I went over all possibilities and ruled out a break-in so I decided to pretend it didn’t happen.

Odd things kept happening over the next few weeks. One day I was driving in silence when the radio started blasting a station I don’t really listen to. It scared the shit out of me, so I turned the radio off, but it quickly come back on. I freaked out and pulled over into a Kmart parking lot. I turned the radio and the car off and wandered around Kmart for an hour or so. When I returned, my car again smelled like a fresh-smoked cigarette.

A few weeks passed and nothing happened, so I figured maybe the weird things were over. Nope. One night I was sitting in my apartment with a friend when she asked who was sitting in my car. I jumped up and ran to the window, and sure enough, there was a figure in the driver’s seat.

I grabbed a baseball bat and ran downstairs with my friend in tow. When we got outside, there was no one in the car. I checked, but the doors were still locked. My friend and I checked the parking lot, trying to find an explanation, but we came up with nothing.

Fed up with all this, I called the funeral home the next day and spoke to the man who sold me the car. I asked him if anything horrible had happened with that particular car. He was a little taken back by the question, so I told him the strange things that had been happening.

The man then said that the car was usually driven by the funeral home’s best and most senior employee who had recently passed away. He proceeded to tell me how well this woman had taken care of the car, almost as if it were her own. I then asked if this woman had been a smoker. He said yes. I knew right then and there that she was behind the mysterious events.

Since then, strange little things have happened with the car like the hazards coming on when the car was unmanned, the smell of cigarette smoke, things being scattered throughout the vehicle, the radio coming on, the locks freaking out, and me feeling soft touches, that kind of thing.

So all in all, I think this lady is just not ready to accept the fact that she’s passed on and that I own the car now. What do you think?”