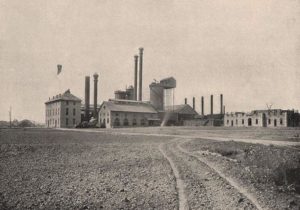 A cruel and coarse ironmaster liked to go foxhunting with his pack of 17 hounds. One day he wanted them to hunt, but they didn’t please him, so he did the unthinkable.

Colebrook iron furnace was built in 1791 by the Conewago Creek in Colebrook, Pennsylvania. In the early 1800s, it was managed by a cruel ironmaster. The furnace was dismantled in 1858.

Iron furnaces companies were run like the plantations in the South before the Civil War. The manager’s word was law. The workers were little more than paid slaves.

The ironmaster owned a mansion which still stands. According to the legend, Jacobs, a man who was cruel to his workers, had a valued pack of hunting dogs. The most valued was its leader, Flora, a mighty white dog who was endlessly loyal to her master.

They would not call him a drunkard or lecher to his face. If they had, they would have been fired or flogged. His servant girls were subjected to unwanted advances.

The man was arrogant, vicious and violent. The only living being he showed rare kindness to was Flora, the white leader of the foxhounds. She was the best in the pack and loyal to him.

One winter night, the ironmaster was so inebriated that he passed out in the snow. Flora found him and dragged him back to the mansion. She barked and howled until servants woke and carried the man inside. She saved his life.

In October, he decided to go fox hunting. The ironmaster spent the night drinking with other hunters. He made heavy bets about how good his foxhounds were. He was still drunk when he called the hounds in the morning. Flora was unable to get the pack to follow her. The animals were lethargic.

Fellow hunters told him the dogs were in no condition to hunt. Someone suggested the dogs were poisoned to ensure the ironmaster would lose his bet. The bully said the hounds would hunt that day or they would hunt in Hades.

He raised his iron-tipped whip to beat Flora. She yelped in response. It was difficult to get the dogs to follow her. The hunting party rested when the ironmaster became filled with rage because they hadn’t seen a fox.

The man acted like a lunatic. He whipped the hounds toward the furnace. When they got there, he pursued them relentlessly until they fell into the fire, howling in pain and terror.

Then, he saw Flora. He called to her. She whined. He whipped her, but she didn’t move. One of the workers was brave enough to remind the brute she had saved his life. The ironmaster responded by turning the whip on the man and telling him he would throw Flora into the furnace. The worker refused at first, but went toward the hound. She growled, baring her fangs. The worker fled.

The ironmaster’s mood seemingly changed. He called out gently to the dog. She went to him and jumped into his arms. He threw her into the furnace.

Later, some workers claimed they heard the hounds howling. Others believed that it was the ironmaster’s cries. The brute became morose and would sit, watching the furnace’s flames, drinking heavily. He rarely spoke. Servants reported that he muttered to something unseen and would pet something invisible lying by his feet.

The ironmaster’s mental health deteriorated. People heard him say Flora’s name. The brute became bedridden. One day he screamed out that the hounds were coming for him. His servants looked out of the window and saw nothing. When they looked at the ironmaster, he was dead.

Many people have heard the hounds howling and some have seen the pack running through the countryside, led by Flora.