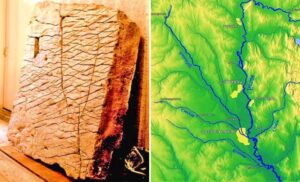 In 2002 the scientists of Bashkir State University in Russia claim that they found an undeniable proof of the existence of a highly advanced civilization in the distant past.

Their evidence is a stone slab with weight more than a ton, (with dimension approximately five feet long by three-and-a-half feet wide, and six inches thick) its age estimated, probably millions of years.

The stone slab was found beneath the house of one of the community leader in the city of Ufa, the surface of the slab showed an amazing accuracy of 3D relief map of the Ural Mountain.

Experts believe that given the accuracy and perspective, the map was created from an aerial point of observations. The discoverer eventually called it “Map of the Creator.”

Alexandr Chuvyrov, professor of physics and mathematics at Bashkir State University, the discoverer, said that during his research of the traces of ancient Chinese influence in the region and had heard the stories of the 20th century researchers from various ancient slabs.

Even though he’s very interested, he barely couldn’t find any single stone slab, until one day when a head of the local agricultural committee told him that there is one stone slab beneath his house.

Alexandr Chuvyrov named the stone Dashka in honor of his granddaughter who was born on that day.

“At first sight, I understood that was not a simple stone piece,” said Chuvyrov. “But a real map, and not a simple map, but a three-dimensional. You can see it yourself.”

After recovering it, Chuvyrov being shocked because he found a map that most accurately described many existing natural features, and many no longer exist, including the discovery of a system of canals, dams and reservoirs, and the inscriptions in an unknown language.

The Map of the Creator is comprised of three levels, strongly suggesting that it did not originate in nature but was artificially made. The first layer is roughly 7 inches (18cm) of a cement or ceramic compound based on dolomite.

The second layer is roughly 1 inch (2.5cm) of diopside glass enriched with silicon. The third layer is only a few millimeters thick and is made of a calcium-porcelain mixture, perhaps to give the tablet added protection or perhaps to create a diffused light to better illuminate the stone.

“How did we manage to identify the place?” said Chuvyrov. “At first, we could not imagine the map was so ancient. Happily, relief of today’s Bashkiria has not changed so much within millions of years. We could identify Ufa Height, while Ufa Canyon is the main point of our proofs, because we carried out geological studies and found its track where it must be according to the ancient map.

“Displacement of the canyon happened because of tectonic stabs which moved from East. The group of Russian and Chinese specialists in the field of cartography, physics, mathematics, geology, chemistry, and Old Chinese language managed to precisely find out that the slab contains the map of Ural region, with rivers Belya, Ufimka, Sutolka.

“You can see Ufa Canyon – the break of the earth’s crust, stretched out from the city of Ufa to the city of Sterlitimak. At the moment, Urshak River runs over the former canyon.”

It was first discovered in July 1999, and has been subjected to numerous test by the scientist of Russia. The results are surprising, to say the least. The age determinations have been based on radio-carbon dating test, however the origin of the stone is still questionable.

The technical difficulties in creating such an accurate map of this discovery is much more than any ancient culture that previously believes by orthodox scientists which have occupied the region, or elsewhere, anywhere on Earth. To date, the ancient technology used to make the map is unknown and extremely advanced.

This map is still very difficult to reproduce. Some researchers believe that this slab is a fragment of a complete map of the earth. Recent discoveries indicate that the slab is a piece of a larger artifact.

The Dashka stone continues to undergo scientific testing and is not available for public viewing.