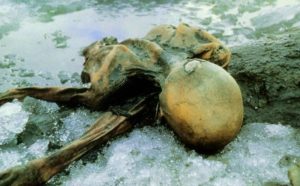 On September 19th, 1991, Two German hikers were on their way up through the Ötztal Alps when they discovered a well-preserved human mummy – the oldest ever found in Europe. The controversial discovery was made in Hauslabjoch, on the border between Austria and Italy.

In the 13 years that followed, seven people associated with his discovery died. In some cases, the deaths seem like your standard, run-of-the-mill demises, but four of them are creepily violent or odd enough to make the other three seem like maybe the 5,300 year old leather hunter may have a bone to pick with the people who unearthed him and then played Operation with his remains.

The popular press has been quick to ascribe these deaths to the “curse of Ötzi”. However, hundreds of people have worked on the Iceman project, and many years have passed since the corpse was first discovered. It is therefore not remarkable that some of those people have since died, however, talk of a curse persists to this day.

The first death occurred in 1992 when Rainer Henn, the forensic pathologist who put Otzi in a body bag with his bare hands, was killed in a car crash on his way to a world conference to discuss the Iceman. Next, Kurt Fritz, the mountain guide who lead Henn to Otzi, and subsequently uncovered Otzi’s face, died in an avalanche. Death number three came in the form the man who filmed the recovery of Otzi, died of a brain tumour.

Helmut Simon, who with his wife was the person who actually found the Iceman in the first place, went missing for 8 days in 2004. When his body was found he was laying face down in a stream, where he had landed after falling off a 300 foot cliff. Dieter Warnecke, the head of the rescue team that found Helmut, dropped dead of a heart attack an hour after Helmut’s funeral
Victim number six, Konrad Spindler, bit the dust from complications arising from having Multiple Sclerosis six months after he was quoted as saying “I think it’s a load of rubbish. It is all a media hype. The next thing you will be saying I will be next.”

While he may not have believed in curses and considered it to be “a load of rubbish” Konrad would probably agree in the irony of his death having made those comments just six months previously.

The seventh and final death was in 2005, Tom Loy, a scientist who discovered human blood on Oetzi’s clothes and weapons, died of a hereditary blood disease. This would normally be considered nothing more than a natural death if it weren’t for the fact that his condition was diagnosed in 1992, the year he started working with the Iceman.

Evidence shows that the Iceman met with a violent end himself, having been shot with an arrow before having his head bashed in. Research suggests that Ötzi was a shaman and was killed by his enemies in order to end his reign. So basically Otzi was an ancient murder victim left in the mountains to mummify in an unmarked grave. We can be pretty sure that if curses are real, this is the kind of thing that causes them.