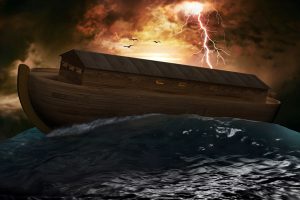 The ancient flood that some scientists think gave rise to the Noah story may not have been quite so biblical in proportion, a new study says.

Researchers generally agree that, during a warming period about 9,400 years ago, an onrush of seawater from the Mediterranean spurred a connection with the Black Sea, then a largely freshwater lake. That flood turned the lake into a rapidly rising sea.

A previous theory said the Black Sea rose up to 195 feet (60 meters), possibly burying villages and spawning the tale of Noah’s flood and other inundation folklore. But the new study—largely focused on relatively undisturbed underwater fossils—suggests a rise of no more than 30 feet (10 meters).

Marine geologist Liviu Giosan and colleagues carbon-dated the shells of pristine mollusk fossils, which the researchers say bear no evidence of epic flooding.

Found in sediment samples taken from where the Black Sea meets the Danube River, the shells “weren’t eroded, agitated, or moved,” said Giosan, of the Woods Hole Oceanographic Institute in Massachusetts. “We know the mud is exactly the same age as the shells and so can determine what the sea level was about 9,400 years ago.”

The results suggest the Black Sea rose 15 to 30 feet (5 to 10 meters), rather than the 150 to 195 feet (50 to 60 meters) first suggested 13 years ago by Columbia University geologist William Ryan and colleagues. Ryan declined to be interviewed for this story.

In 1993 a Black Sea expedition found evidence of former shorelines and coastal dunes at depths of up to 390 feet (120 meters). Researchers said these areas had been flooded when the Mediterranean and the Sea of Marmara—which lies between the Mediterranean and the Black Sea—breached a rocky barrier across the Bosporus, the Turkish strait that links the Maramara with the Black Sea.

Before such a flood, Ryan and colleagues said the flooded regions may have been rife with agricultural settlements. His research supports the notion that the flood submerged some 62,000 square miles (100,000 square kilometers), driving out farmers in droves, thereby supercharging the agricultural development of Europe, to the west.

However, Giosan’s new study, which appears in the January issue of the journal Quaternary Science Reviews, indicates a less catastrophic influx, submerging only about 1,240 square miles (2,000 square kilometers).

That’s because, according to the new study, the Black Sea’s pre-flood water levels were significantly higher than Ryan’s study suggested. As a result, there may have been much less water cascading through the Bosporus and onto the exposed continental shelf surrounding the Black Sea.

The ages of the shell fossils detailed in Giosan’s report hint that the pre-flood sea surface was only 95 feet (30 meters) lower than it is today. Columbia’s Ryan, by contrast, suggests the Black Sea’s rise has been at least 150 feet (50 meters) since reconnecting with the Mediterranean some 9,400 years ago.

Giosan’s analysis points to a reconnection that was “quite mild,” said Mark Siddall, an oceanographer at the University of Bristol in the U.K. who was not involved with the study.

“It looks like the connection may have involved an overspill from the Sea of Marmara of just a few meters,” Siddall added.
Tony Brown, a paleo-environmentalist at the University of Southampton in the U.K., said he fully supports Giosan and colleagues’ new findings.

“This seems to be a further nail in the coffin of the Ryan hypothesis,” Brown said.

“I hope this will counter some recent catastrophist and misguided accounts of the spread of farming across Europe by what is likely a mythical flood.”