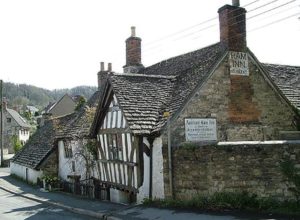 If appearance were any indication as to whether or not a location is haunted, then the Ancient Ram Inn, located in Gloucestershire, England, is indeed haunted. The Ancient Ram Inn was built in 1145. It may be the site chosen for the construction of the Inn that is at least partially responsible for the paranormal activity reported at the Ancient Ram Inn.

The Ram Inn was not only built on a ley line that runs from Ley Farm to Hetty Peglar’s Tump, it also sits directly on top of an ancient pagan burial ground. With that as the setting, it is not at all surprising that a wide range of paranormal activity has been and continues to be reported at the Ram Inn.

The Ancient Ram Inn was originally used to house masons who were building Saint Mary’s Church and Lacock Abbey. Once the construction was completed, the building and surrounding property, which is believed to have been as much as three times the size of the current lot, became the property of the church.

The building served as the home of the local Bishop, today the so-called “Bishops room”, is said to be one of the most haunted areas of the Ram Inn. In all, there are believed to be as many as twenty ghosts and or supernatural beings that inhabit the Ram Inn.

In the late 1800′s the building began to operate as an inn and continued until 1968, when the Ram Inn was purchased by John Humphries. Despite the fact that Humphries claims that on his first night at the inn he was thrown from his bed be an unseen force, he continues to live at the inn to this day.

Among the wide range of paranormal strangeness reported at the Ram Inn, the ghost of a little girl who was murdered named “Rosie” and she seems to have a lot of company. The ghost of a pagan high priestess as well as incubus and succubus demons, have been reported by Humphries family members as well as visitors. The Ram Inn also has the typical cold spots often experienced at haunted locations as well as the so-called “orbs.”

If you were stay at the Ancient Ram Inn, you should not be surprised if you hear the screams of young children, see furniture moving by itself, or see the phantom figures of ancient monks and the ghostly apparitions of the victims of human sacrifice.

If only a fraction of the paranormal activity reported at the Ancient Ram Inn is true, the old inn lives up to the billing as one of the most haunted places in Great Britain.

Can You Really Smell a Ghost?