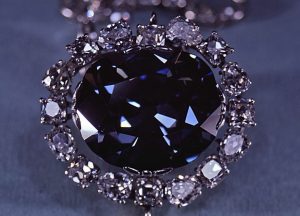 It’s the most popular attraction at the Smithsonian Institute. Skeptics tried to debunk its reputation of causing misfortune. Documentation to the contrary exists.

According to one legend, the Hope Diamond adorned the forehead of an Indian temple idol when it was stolen by a Hindu priest. He was captured and tortured to death.

According to another, Jean Babtiste Tefernier, French trader and smuggler, stole the gem. Since then, the stone has brought death and/or ill fortune to him and subsequent owners.

The first to fall victim to the gemstone was Tefernier. He sold the diamond for small fortune, but his son gambled and Tefernier lost most of the profits when he paid the wastrel’s debts.

He returned to India to try to recoup financially and was killed by a pack of wild dogs. The next victims were members of France’s elite: Louis XIV, Marquise de Montespan, Nicholas Fouquet, Louis XVI, Marie Antoinette and Princess de Lamballe.

Dutch jeweler Wilhelm Fals acquired the gem and was murdered by his son, Hendrick who, later, committed suicide. Diamond merchant Francis Beaulieu acquired the stone and sold it to King George IV. Both died in misery. Henry Philip Hope and heir to the gemstone, Lord Francis Hope and wife Mary suffered great misfortunes.

Washington Post tycoon Edward Beale McLean acquired the gem. During the family’s ownership, there were many tragedies. Evalyn Walsh McLean was the last to possess the stone and experienced misfortunes.

After her death, the heirs sold the Hope Diamond to Harry Winston, a dealer in precious gems. He donated it to the Smithsonian Institution in November 1958 and sent it to the museum, wrapped in a brown paper bag, via the US mail.

The Hope Diamond is on display, accompanied by the package it was sent in, surrounded by white diamonds. Scientists at the DeBeers Laboratory tested the blue diamond by placing it under ultraviolet light. 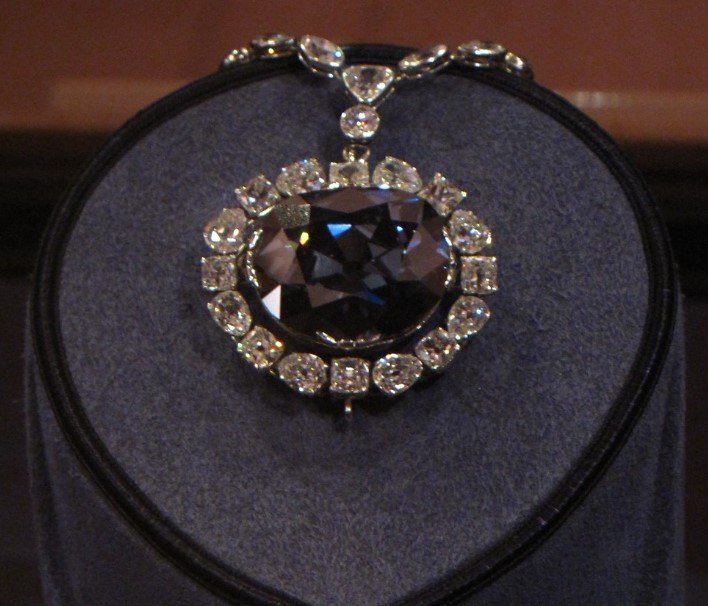 The gem emitted a red-orange glow for several minutes after exposure. Diamonds of other colors don’t react like this. Other blue diamonds have been tested and glowed, which leads scientists to believe those gemstones are part of the Hope which had been cut to make others.

Debunkers of the Hope Diamond’s curse point out that many of its owners suffered no tragedies or deaths. This, by extensive research, appears to be the only argument against the gem’s legacy. Skeptics aver curses don’t exist, claiming they’re coincidences, frauds or imaginations run amok.

Nandor Fodor, psychoanalyst and highly respected parapsychologist, has written about “cursed” objects after doing extensive research and investigations. His theory is that objects can be affected by a Gestalt, which, by his definition, is a collective psychological entity that exists on another plane. It’s not human but is a “Group Soul.”

When objects are treated with disrespect, theeaders who enjoyed this article might Gestalt is released in the form of a curse. This theory doesn’t account for all documented cases, of which there are many.

Serious researchers and investigators of the paranormal keep an open mind and agree that something exists beyond known scientific laws. Theories try to explain this, but causation is, for the present, unknown.