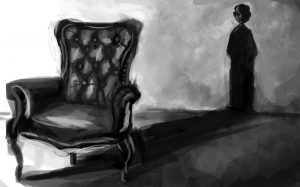 For more than three hundred years, mystery and speculation has surrounded the famous Busby Stoop Chair.

Thomas Busby was the first owner of what is now known as the Busby Stoop Inn, which is located in Kirby Wiske, a small village near the town of Thirsk, in North Yorkshire.

The death of Busby has been commonly connected with a wide range of fatalities that happened later in history, generally because of the chair itself.

In the year 1702, Busby had a meeting with his father-in-law, Daniel Auty (some historians use the spelling ‘Awety’), with whom he had become a partner in petty crime. After a heated argument, Busby came back to the pub to find Auty sitting in his favorite chair. Based to the story, Busby, whose reputation as a drunkard was well known throughout the community, ordered Auty to leave, and after a while, went and found him at what was then called Danotty Hall. Here, police say that Busby murdered Auty with a hammer and hid the body in the woods.

The authorities soon located Auty’s remains and arrested Busby at the pub. The story goes that as he was being led away to the gallows, Busby screamed out curses to anyone who should ever sit in his chair. Being in a drunken stupor at the time, it is very unlikely that Busby drew much attention to his rantings, although they were documented by several witnesses.

Some accounts reported that Busby shouted to onlookers that anyone who sat in his chair would die a horrible death, just as he was about to do. Busby was led across the street and hanged in a makeshift gallows, where his remains were displayed for days afterwards.

Since that time, many people have reported seeing the ghost of Thomas Busby, at or near the hangman’s gibbet, with a noose around his neck. But it is the curse of his favorite chair that has become the subject of both folklore and mystical intrigue. There are verified accounts of a good number of people who sat in Busby’s “haunted” chair in the years that followed, and meeting with sudden death soon afterwards.

In the late 1800’s, a chimney sweep and his friend were sitting in the pub, and the sweep, who apparently had occupied the Busby Stoop Chair, was found dead the next morning, on a gatepost next to the old hangman gibbet.

Later, a certain Mr. Earnshaw, who for a time was landlord of the inn, overheard two RAF pilots talking about the famous chair, and witnessed them take turns sitting in it. On that same day, both pilots were killed when their car struck a tree. There are accounts of serveral motorcyclists and bicyclists who, after stopping at the inn for a drink, were later involved in fatal collisions with automobiles.

One man who sat in the Busby Stoop Chair died of a massive heart attack the following night. A hitchhiker, after spending time at the pub for refreshment, and who presumably occupied the famous chair, was struck and killed by an automobile two days later. The inn itself was becoming more and more famous as these stories became widely circulated, and most folks agreed that it was either the most amazing of coincidences, or an example of actual cursed enchantment.

The pub was later owned by a brewery, and in the 1970’s the landlord asked that the chair be removed from the premises. It is now found in the Thirsk Museum and it is, of course, now protected from occupancy. No one has sat in the famous “haunted” Busby Stoop Chair since 1978. And naturally, the Busby Stoop Inn is a favorite stop for inquisitive ghost hunters and curious tourists.