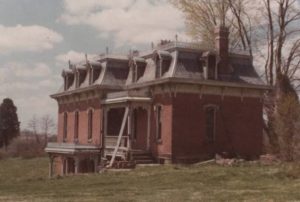 The story of Mudhouse Mansion is riddled with mystery, which is perhaps why after slipping into abandonment in the 1930s it became the source of so many legends surrounding it.

It was built sometime around the 1870s on a little hill in Lancaster, Ohio, and was sold in 1919 to the Hartman family, whose descendants remain the owners of the land the property was built on. Henry Hartman died in 1930 and the property was inherited by his daughter. Although it appears she chose never to live in the property, and it remained abandoned for the next 85 years.

According to one legend, the house was built in the 1800s by a government official who lived there after the Civil War. The man still kept slaves in Mudhouse Mansion, even though it was illegal. It seems this man didn’t abide by the law and kept his slaves locked up in an outbuilding at night.

He treated his slaves very poorly and conditions were so bad that one slave started building a tunnel underneath the wall of the outbuilding. He dug a little every night after the lights in the mansion had gone out and the slave owner and his family had gone to sleep.

Eventually his tunnel was completed and he squeezed himself down the small opening and came up on the other side of the wall. In the dead of night, he crept towards the mansion, slipped the lock on the back door, tip-toed up the staircase and killed everyone inside. In the morning, locals discovered what had happened, but all the slaves had escaped and no-one was ever charged with the crime.

The house lay vacant for years afterwards and neighbors heard strange groans and shrieks coming from within the empty mansion. Everyone believed it was haunted by the ghosts of the slave owner and his family. Nobody dared to enter the menacing looking building.

According to another local legend, a man actually did buy the house in 1892 and moved in with his wife and their 3 children. Neighbors saw the family moving in, unloading their belongings from trucks and carrying them into the house.

And then… nothing. Neighbors never saw them again. The family never left the house. Neighbors thought it was very odd for a family of 5 to spend all their time indoors.
When one neighbor looked out her bedroom window, all she could make out was the figure of a woman, dressed all in white, standing at the second floor window. The figure wasn’t doing anything, just standing there, staring at her.

When policemen broke into the mansion and climbed the stairs to the second floor, they were greeted by a terrible sight. All 5 family members were hanging lifeless from the ceiling. They were all dressed in white nightgowns. It appeared that they had taken their own lives. The figure the neighbor had seen was the mother of the family. And she hadn’t been standing at the window, she had been hanging there… for 10 whole days.

The Mudhouse mansion was also rumored to be the original home of the infamous urban legend Bloody Mary and locals called it “Mary’s House” and tell each other that the famous Bloody Mary of urban legend grew up there.

People who live in the area say that on cold dark nights, you could sometimes still see the figure of a woman, all in white, standing motionless at the second floor window. After that, nobody would live in the house and it has remained vacant, although people still came to visit the old mansion but the current owner did not allow anyone to enter the property.

She was afraid that if anyone went in, they would never come out alive again and on September 21st, 2015, the Mudhouse Mansion was demolished by the property owners, the Mast family.